Politician disappears -- and people are upset? 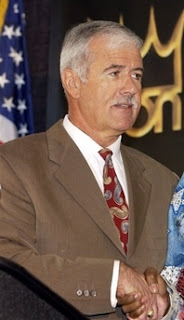 This is, for now anyway, the Mayor of Atlantic City, New Jersey.

Wayne Perry's story for the AP, posted this afternoon on Yahoo! News, says that Mayor Bob Levy called in sick on September 26, then "climbed into his city-issued Dodge Durango and seemingly vanished." Aides now say the mayor is hospitalized somewhere, but they won't reveal where or the malady from which he may be suffering. (He certainly is suffering, according to the story, from a federal investigation arising from recent disclosures that he exaggerated his service in Vietnam.)

According to Perry's story, a move is underway to declare the mayoral office vacant and install someone in Mayor Levy's stead.

It's not the way we do things here.

Recently, when the President of the Cook County Board suffered a massive stroke, voters here renominated him anyway. Then, when it could no longer be pretended that he would ever resume his office, his son was substituted in his stead... and elected.

(Of course, we knew the incumbent was at home or in the hospital -- although he managed to be conveyed to or from at least once without the press finding out -- so he was never actually missing.)

And then there's the budget mess in Illinois: Despite the fact that the Democrats control both houses of our state legislature, and despite having a Democratic Governor, our State could not pass a budget for months after the legal deadline and the various parties are embroiled in public, personal feuds. (This Sun-Times column by Rich Miller will give you a taste -- a bitter, unsavory taste -- of just how bad things have gotten here.)

A lot of people here would like our politicians to go missing.

Atlantic City: How did you do it?
Posted by The Curmudgeon at 2:38 PM

No gloating over the Cubbies loss? I'm severely disappointed!

in Chicago it's not the politicians who make people disappear...smile.

did you see larry moe and curley on tv last night in nj?? what a bunch of goons. i think the guy disappeared cause he's scared of THEM!!! ha ha

A long time ago, the mayor of Boston, Curley I believe, was re-elected while he was in prison. I agree though, Chicago is probably the tops for political trickery.

In CT, we have a Rep. governor and veto-proof Dem. majorities in the house and senate, yet the legislature couldn't override the Gov's veto threat, and fell in line behind the Gov in adopting her budget. This abused taxpayer approved that...

We had a politician die while in office. His wife stepped in until the end of his term. She was re-elected Twice! Until this happened I had no idea there was no "second" who would normally fill in. I was amazed a relative could take over the position.

I love Atlantic City...so many crazy things there. Almost makes me not want to leave home and risk missing out on the fun!