Curmudgeon seeks the comfort of the 19th Century. Word.

Whilst making the rounds recently, I ran across this post at Skittles' Place -- if you follow the link you will find a music video by an artist named Sir Mix-a-lot entitled "Baby Got Back," a big hit, apparently, in 1992. So says Wikipedia.

I am not often accused of being a feminist -- but I was, uh, uncomfortable with some of the lyrics. (I'd never actually viewed the video before watching it on Barb's site; I must have heard at least snippets of the song previously.) I am informed, though I do not really understand, that these lyrics are tame by comparison with some other "hip hop" hits. Word. (I believe that expression is correctly used in context.)

So I went Stumbling around the Internet looking for things that were more my speed.

And I found The Gentleman's Page, subtitled "A Practical Guide for the 19th Century American Man."

With this I can relate.

So, with apologies to Mother Jones RN, who has done so many marvelous posts about antiquated nursing practices, I herewith steal shamelessly cite limited examples from "The Gentleman's Page." (I have added my own comments in italics.)

"It is the duty of a gentleman to know how to ride, to shoot, to fence, to box, to swim, to row and to dance. He should be graceful. If attacked by ruffians, a man should be able to defend himself, and also to defend women from their insults."
Rules of Etiquette and Home Culture. 1886

Unfortunately, I can't swim -- and, as a practicing coward, I generally run at the first sign of ruffians....

"Never scratch your head, pick your teeth, clean your nails, or worse of all, pick your nose in company; all these things are disgusting. Spit as little as possible and never upon the floor.

The Curmudgeon always aims for the spittoon. And my aim is, gradually, improving.

"If you are going into the presence of ladies, beware of onions, spirits and tobacco." 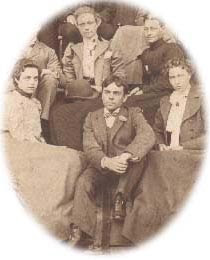 "A gentleman never sits in the house with his hat on in the presence of ladies for a single moment. Indeed, so strong is the force of habit that a gentleman will quite unconsciously remove his hat on entering a parlor, or drawing room, even if there is no one present but himself. People who sit in the house with their hats on are to be suspected of having spent most of their time in bar rooms and similar places"
Martine's Handbook 1866

It's a good thing I don't wear a hat. Now they'll never suspect me....

* Never allow butter, soup or other food to remain on your whiskers
* Never wear gloves at the table, unless your hands are for some special reason unfit to be seen.
* Never, when serving others, overload the plate nor force upon them delicacies which they decline.
* Never make a great display when removing hair, insects or other disagreeable things from your food. Place them quietly under the edge of your plate.
Hill's Forms

I didn't see what to do if the bug was too big to fit comfortably under the side of the plate.

where have all the gentleman gone....

Yo yo. Enjoyed this post tremendously as it was just so "quaint"! It seems that manners, like gentlemen, have all gone the way of the steam engine as I work with a lot of guys who never ever take their hats off and as for spitting, etc. ... ew!

Surely there are still some gentlemen around somewhere but I'm willing to bet they are all in hiding!

Indeed, keep the food out of your whiskers/beard. You will not be able to keep a secret if food bits are present...