It's the day after Columbus Day and today's challenge from Barb, the proprietress of "Heads or Tails," is timely. Today's word: Explore.

So, let's see, what shall we talk about? Columbus?

I've recently written about space exploration, as in this recent post about how Asian nations are mounting a serious effort to get to the Moon while the United States is merely pretending to revive our space program. But there's a follow up: NASA's administrator was recently quoted as saying that, when America goes back to the Moon in 2020, he fully expects our astronauts to be greeted by the Chinese. And he's apparently OK with that. (Of course it was George Bush who promised to take America back into space; therefore the next President -- who will not wish to be associated with Mr. Bush in any way -- will bury the program.)

I can just imagine how it might be if modern attitudes had confronted Chris Columbus (the explorer, not the film director) when he pleaded his case to Queen Isabella in the newly unified court of Aragon and Castile. "We have problems of our own," he'd be told. "It's taken us almost 800 years to re-unify the country after the Muslim invasion and you want us to go out on some speculative foreign venture?"

Of course the Indians wouldn't have minded. Perhaps the Aztecs might one day have discovered Europe.

It's ironic that the Chinese will probably get to the Moon before America returns. It took China a long time to come around to the idea that exploration pays benefits for a country as a whole -- they turned inward after the voyages of Zheng He in the early 1400's and were nearly swallowed up by a then-vigorous West in the centuries that followed.

Emphasis on "nearly." But China -- as I've so often read -- plays for the long term. 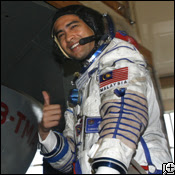 And speaking of Asian explorers, meet Sheikh Muszaphar Shukor of Malaysia, scheduled to launch tomorrow aboard a Russian Soyouz rocket for an eight day stay at the International Space Station.

The link will take you to an article on Discovery Channel News wherein Shukor's efforts to appropriately practice his Islamic faith while in orbit are seriously addressed. From the article: "Malaysia's Department of Islamic Development prepared a 12-page booklet, titled A Guideline of Performing Ibadah (worship) at the International Space Station, to address such delicate issues as the Ramadan fast (postpone it until the return to Earth) and cleansing rituals (use a wet towel)."

The article quotes Shukor as saying, "Islam is very lenient. If I can't fast in space I can always come back and do later."

Lenient, tolerant Islam. So that a man in orbit can practice his religion.

Meanwhile, in a cave in Pakistan (probably), resides a model of intolerance (although, as you will note from the before and after pictures, his rejection of all things modern doesn't extend to hair dye).

Explorers can fire the imagination of the world. What a wonderful thing it would be if Sheikh Shukor's vision of an Islam that can be compatible even with space exploration catches hold in the Muslim world.

I'll try to be more frivolous next time. In the meantime, check out the rules and graphics for Heads or Tails by clicking this link and playing along yourself.
Posted by The Curmudgeon at 8:24 AM

hey nice idea for the post, still am not able to convince myself real advantages of space program though :)

You make some good points. I especially like how you referenced how it would be different for Christopher Columbus now. Very intelligent and well thought-out post.

what a great take on this weeks theme! Great post and I learned a few things too.

A good post with intersting things. Let's give Bin Laden some hair dye!

I don't think we Americans would be willing to back the financing of a new and better space program.

Maybe if they could get Shatner to promote it...

I would love to see the US more committed to space exploration and travel...

I think we all have a lot to learn about China and it's power and influence. Americans seem to be blind about Asia's power.