And what did the President say when he met the Dalai Lama? 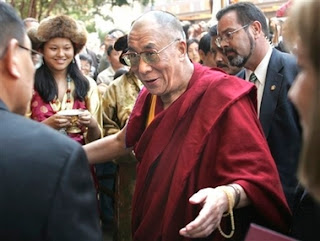 Klug's original story quoted Chinese Foreign Minister Yang Jiechi as strongly protesting these honors for the exiled religious leader: "We solemnly demand that the U.S. cancel the extremely wrong arrangements. It seriously violates the norm of international relations and seriously wounded the feelings of the Chinese people and interfered with China's internal affairs."

The Chinese are expected to recover from their wounds.

Klug's story notes that the Dalai Lama is the "spiritual leader of Tibet's Buddhists" and is revered as "a god-king" in Tibet.

China considers the meetings with the Dalai Lama to be an interference in its "internal affairs" because it swallowed Tibet in 1951. The Dalai Lama's continued international prominence continues to give China indigestion.

(AP writers Anne Gearan and Ben Feller in Washington and Anita Chang in Beijing contributed to Klug's report. The Dalai Lama's Congressional Gold Medal was taken from this article on USA Today.)

The (formerly 'Red') will just have to get over it. What seems to irk that government is that their belief that Communism does not mean peace and freedom for their conquests. Communism as an ideology doesn't allow for any dissent or freedom, especially for religion. I'm happy the Dalai Lama is in DC. China feels that might is right, but many Tibetans do not agree...