Homily draws new suit in McHenry County -- and, as a bonus, an old joke about sermons 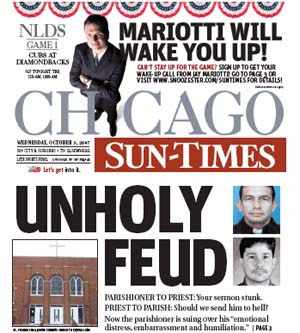 Stefano Esposito has the front page story in this morning's Chicago Sun-Times, but I saw the story yesterday in the Chicago Tribune.

Here's the set-up, just in case this hasn't made the news in your corner of the world: Angel R. Llavona, a parishioner at a Crystal Lake, Illinois Catholic church, didn't care for the sermon preached by the parish curate, Rev. Luis Alfredo Rios.

The Tribune story quotes the message Llavona left for Fr. Rios on the following Monday: "I attended Mass on Sunday and I have seen poor homilies, but yesterday broke all records."

According to the Tribune story, which describes the Llavona's newly-filed lawsuit against Fr. Rios; the parish pastor, Msgr. Daniel Hermes; and the Diocese of Rockford (McHenry County, where suburban Crystal Lake is located, is outside the Archdiocese of Chicago), Llavona "attempted to meet with Rios but was rebuffed." So he left a second message (again quoting the Tribune): "I came to meet with you and you refused. I am available for dialogue with you. You always say you want people to tell you things in front of you, but today you ran away."

But, according to Llavona's suit, Fr. Rios didn't keep running away. Instead, at another Mass, while Llavona was seated with the rest of the congregation, Rios played the answering machine tape and said (according to the Sun-Times story), "This is the person in charge of religious education here last year. That's why it is no surprise to me [that] we had the kind of religious education we had. That's why we didn't get altar boys. What should we do? Should we send him to hell or to another parish?"

I don't know how Mr. Llavona's defamation suit will fare -- and obviously there's some history here between these gentlemen that can only be hinted at in two brief news stories -- but, on first blush, it seems Fr. Rios might consider a refresher course in Scripture. It seems as though he may have missed the part about 'turning the other cheek.'

But this unfortunate story at least reminds me of an old joke:

The priest was getting along in years and he tended to wander a bit in his sermons. Attendance was off -- worse, collections were off -- and there'd been complaints.

So the Bishop decided to call the old man in for a little counseling.

The old priest took the invitation in stride. He was eager to learn from the Bishop who had a great reputation as a fine, strong preacher. And the Bishop could see this in the old man, so he was very gentle in his coaching.

"Father," the Bishop told the priest, "when I give a sermon I try and start out with something that will grab hold of everyone in the congregation right away. I want them to even be shocked a little -- and then I say something that turns it all around and I have them."

"That sounds grand," the old priest said, "can you give me an example?"

"Ah, let me think... yes... there's one I've used a dozen times and it's always worked wonderfully for me. I start out shouting: I'm in love!

"You can see how that gets them sitting up, right, Father?" the Bishop asked.

The old priest nodded and the Bishop continued. "Now I make them wait -- just a couple of seconds -- then I shout again: I'm in love with a woman! Well, now they're on the edge of their seats. But I still make them wait another second or two -- and then I shout again: And her name is the Virgin Mary! And then I go on and they hang on my every word. You might try something like this yourself, Father."

"Ah, yes, yes," the priest agreed and the interview concluded on these amiable terms. And as the week wore on the priest thought and thought about how he could adapt the Bishop's technique for his own Homily at Sunday Mass, and he meant to write it all down, he really did, but things got busy and there were sick calls and confessions to hear and there was someone in to look at the furnace and somehow it was Sunday morning again and he hadn't had the time.

Nevertheless, the old priest was determined not to disappoint the Bishop. He tried hard to remember what he'd been told as he stepped into the pulpit to begin... and this is what he said:

"The Bishop's in love!

"And I can't remember her name!"
Posted by The Curmudgeon at 4:29 PM

Email ThisBlogThis!Share to TwitterShare to FacebookShare to Pinterest
Labels: Catholicism, Just for giggles, News and Views

Can't wait to tell the Brothers and priest at my son's school!

{giggling} this joke was funny, Curmy.

I agree that priest sounds like he needs a refresher course in turning the other cheek.