The Devil hosts a celebratory banquet

It was quite a gathering in one of the lower circles of Hell last weekend, a sumptuous-looking banquet (though it tasted like shit, because it was made of shit) in an ornate ballroom from which the damned are usually barred.

The Prince of Darkness himself presided. As imps and other minor demons cleared away the gold plates, still reeking of horse manure, Satan poured himself another generous goblet of blood and strode to the dais, looking out at the many guests of dishonor.

Below the head table the entire room was filled with the shades of Catholic clergy -- priests and brothers and even a few nuns. Every one of these had stolen the innocence of boys and girls in their care -- parishioners, students, orphans, relatives. A great many priests, in fact, who'd carefully cultivated seminarians or altar servers. Teachers who had groomed students. So many who'd been 'treated' and returned to different churches or schools -- rested, refreshed, and more than ready to renew their pursuit of innocent children.

But none of these were at the head table.

No, as the Devil gripped the podium with one claw, and hoisted the goblet in the other, he looked right and left at the bishops and abbots and provincials, all garbed in their best ecclesiastical finery. Not by their choice. No, this was at the Devil's own insistence.

It was a terrifying sight to behold, and those beholding it shuddered and shriveled.

Which only made the Evil One smile more.

"I drink to you, reverend fathers, brothers, and sisters," the Devil began, nodding gravely. "I could not have done it without you -- and I am grateful."

There was a buzz in the assemblage, despite themselves. Gratitude was not something ordinarily expressed by the Prince of Darkness. Anger, fury, hatred -- sure -- but gratitude? This was unexpected, and quite unsettling. None wanted to get back to their specific torments, you understand, but the Devil's gratitude stung more, at that moment, than their usual hot pokers.

The Devil paused. He knew that no one in the room followed events back on Earth; an eternity of torment leaves no time for such things. So they didn't know what they'd done to merit his thanks.

That made the coming revelation even more delicious, he decided. He chuckled.

"Without your betrayals of your vows, without your abuses of authority, the Irish would never have done what they did this week -- but I am especially grateful to your superiors, to the bishops, and abbots, and provincials here assembled" -- and here the Evil One gestured to include those at the head table. "Not all of them shared your interest in little boys or little girls," the Devil said in a confidential tone, "but they squandered the moral authority of the Church by protecting you instead of the children you defiled.

"And it's not just the lives of those that you ruined, or the many members of their families who renounced their faith when your depredations were finally revealed, so many of whom eventually came to me--" he paused again, savoring the thought -- "no, now the Irish -- the Catholic Irish of all people -- have voted to legalize abortion! And all because of you....

"Who will listen to a Catholic Church that protected the likes of you?" The Devil actually laughed. "So, thank you, thank you, thank you!" He lifted the goblet a final time, then drained it. "Now get the Hell out."
Posted by The Curmudgeon at 1:55 PM No comments:

Email ThisBlogThis!Share to TwitterShare to FacebookShare to Pinterest
Labels: Catholicism

As I've mentioned here before, I also write a blog under my given name.

It's actually fairly popular -- a thousand page views a day is not uncommon these days, sometimes more. This week, lots more. I've won awards for the blog, and prominent people have told me it provides a genuine service. It recently was mentioned in a news article in a genuine newspaper. You know, a major metropolitan daily.

But no one in my family, and no one among my close friends, actually reads the damned thing.

A friend of 40 years told me not long ago that he did stumble across an article on my real-life blog -- he was researching a particular topic, and my article came up. What's more, he told me, he agreed with the position I took. And, yes, he did look shocked about it. I'll have to look at your blog again, he told me.

I don't know whether he has or hasn't. But judging by everyone else in my immediate acquaintance, I doubt it.

I wonder if this happens to writers who make a living from what they publish.

I kind of doubt it, don't you?

Can you imagine J.K. Rowling at a Rowling family reunion, making small talk with a cousin? J.K. makes some offhand reference to Harry Potter and Cousin Reginald just gives her a blank look. Harry who? he asks.

Of course that couldn't happen. J.K. could show up at that reunion in a limo the size of Luxembourg (whether she does or doesn't is irrelevant -- she could if she wanted to). All her friends and relations (including all sorts of relations she probably didn't know she had 25 years ago) would cheerfully follow her around anywhere she cared to lead, all waving wands and slurping pumpkin juice, if she asked them to.

Why? Because J.K. Rowling has made tens, if not hundreds, of millions from her writing.

Me? I've made tens, and maybe even a few hundreds of dollars from my blog. Not quite the same thing.

Yeah, I can't figure that out either.
Posted by The Curmudgeon at 3:26 PM No comments:

I have a new tyrant in my life 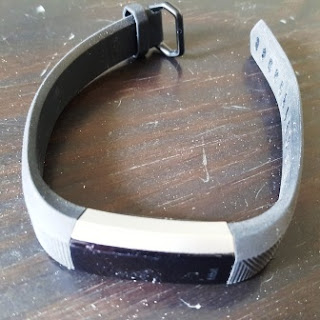 Youngest Son and his wife got Long Suffering Spouse one of these contraptions for her birthday a couple of months back. She liked it. She marveled at how many steps the device registered just as she moved in her classroom, especially on days when she had younger children (my wife teaches Spanish at the parish grade school and, over the course of the year, sees everyone from three-year old preschool through 8th grade). If she ever had time to use the walking track above the gym in the Parish Center -- she seldom does -- she'd come within daily striking distance of the magic 10,000 steps everyone talks about.

Then my wife began thinking. She began to wonder how many steps I was taking each day, going to the office, running errands, pacing while on the phone.

"A hundred, perhaps," I guessed, when she asked me. "A hundred fifty if I have an extra cup of coffee."

She was not amused.

But I already knew I'm going slowly to seed. I'm not going downtown as often as I used to -- and, many times, when I do, I drive down. Recently, I've driven frequently because I've needed to provide chauffeur service for my oldest granddaughter -- Younger Daughter didn't always have access to her car -- Olaf drives to work -- and Granddaughter #1 still had to get to preschool twice a week.

But walking to and from the parking garage is not the same thing as walking home from the train. And, with efiling, I really don't have to come downtown at all except to check the mail and go to court. And I don't have a lot going on in court at the moment. So there have been many days when I haven't bothered to go in. And it's been a cold, wet spring in Chicago this year. Who wants to go downtown when it's raining? The drive is miserable. And who wants to take the train when you know you're going to get rained on? I probably haven't walked home more than 10 times this year -- Long Suffering Spouse will pick me up at the train.

So, when my wife asked me how many steps I thought I took each day, she thought I was being a wisenheimer -- even though I was exaggerating only slightly.

She got me this new infernal device a week ago.

It has surprised my wife, and confirmed my perceptions.

Tyrant.
Posted by The Curmudgeon at 9:23 AM No comments: