Hot off the CTA 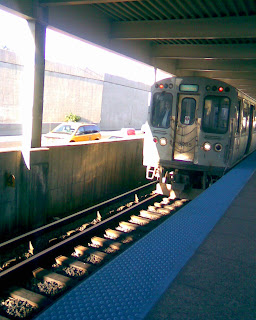 Here's the Blue Line train pulling into the station near where I live. The picture was taken one sunny day some weeks back with my new camera phone.

I thought about using my new camera phone today, because the train -- nice and empty in this photo -- was so full this morning. At Damen, just before reentering the subway tunnel, we left people standing three and four deep on the platform: There was no way for them to squeeze in.

I mention this because, for the second time in as many months, the CTA is threatening massive service cuts and fare increases. A "Doomsday Budget" is soon to be announced. The last threatened round of fare hikes and service cuts was narrowly averted when the Governor provided next year's transit subsidy in a lump sum in the hopes that the Legislature (with whom he is locked in a blood feud) would provide a more permanent solution. Alas, that trick can work only once a year, and the Governor has promised to veto the only legislation that the General Assembly stands ready to approve (by a not yet veto-proof majority).

Now, since I have almost no readers in Chicago proper, why do I burden you with these sad, but for you irrelevant, facts?

It is because I am struggling with what the proper role or purpose of government subsidies should be for mass transit.

Some will say that if the system can't make it from farebox revenues then it should go under, like any business. But this would put more commuters into cars -- driving on roads built and maintained by one or more units of government. It is not exactly a level playing field.

And there are environmental concerns and quality of life concerns, too. My one hour trip to the office each day on the train also takes close to one hour by car -- if you figure in time for parking -- at rush hour. (On a Sunday morning, the train takes at least as long -- and the intervals between trains is greater -- but the same trip by car will take 20 minutes.) Cut mass transit -- or raise fares -- or both -- and traffic will go up... and increased congestion means increased pollution, too.

Of course, this is Chicago. It is generally assumed that there must be massive waste and fraud and idiot nephews and girlfriends and mistresses and ghost payrollers and featherbedders haunting the CTA -- as in every public agency -- but I can't tell for certain you where to find the waste and fraud and so forth in the budget. If this could be cut, could the crisis be averted?

The crowded trains will be the last to be cut, as I understand it, although fares will go up, particularly during rush hours. It will be the weekend and late-night services and the lesser-used routes that will vanish first -- but these are ones most important to the working poor and lower middle class who use them. And where 'early bird' parkers pay only $21 for Loop parking ($26 or $28 or more for later arrivals), is it so terrible to increase fares? (I pay $2 each way on the train now -- $1.75 for me because I pre-pay on a 'transit card' -- and I get an additional discount if I pre-pay $20 at a time.)

It is, I think, a question of measuring the value that mass transit provides society as a whole, but I don't know the proper units of measurement.
Posted by The Curmudgeon at 9:14 AM

Email ThisBlogThis!Share to TwitterShare to FacebookShare to Pinterest
Labels: Neighborhood, Roadkill -- politics in the middle of the road

Good experimental shot. The driver must have been puzzled if he saw you.

I think the first question ought to be: Who, ultimately pays for these things? Taxpayers.

Then: What obligation does government owe its constituency vis a vis transportation?

Mass transit is only one component of moving the constituents, and government owes it to taxpayers to evaluate which elements of their transportation plan need to be improved to move the greatest number of taxpayers from point A to point B.

Whether infrastructure capital costs are moved to transit operating costs seems immaterial, if it meets the needs and desires of the taxpayers.

Well, all I can say here is that your camera phone takes MUCH better pictures than mine does! Nice shot!

I don't take mass transit. Neither does Ralph, so I can't commiserate.
But I agree with Linda. Nice photo.

Take some more pix of the Windy City for those of us who have never been there. Please?