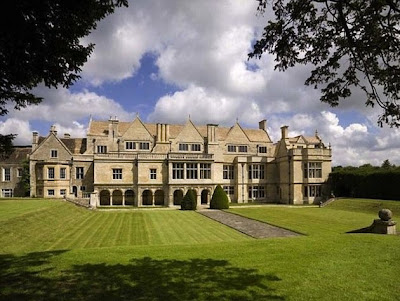 Apethorpe Hall, in Northamptonshire, about four miles north of the ancient market town of Oundle, is on the market, and priced to sell at £2.5 million (roughly $3.88 million). 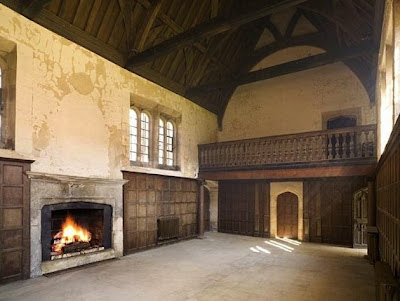 The place is just dripping with history: The oldest parts date from the late 1400s. Queen Elizabeth I stopped off for visits. So did King James I. The house was the family seat of the Earls of Westmorland for 350 years.

But the Fanes don't live there any more.

Although Wikipedia assures us that the 16th Earl is still very much among the living, Americans familiar with the collected works of P.G. Wodehouse will not be surprised to learn that the family sold the place. The surprising thing is that the family sold out early -- in 1904 -- to a Mr. Leonard Brassey. Whether he was later Lord Brassey or merely a relation, English Heritage tells us "Lord Brassey sold the house and gardens in 1949, though retained much of the remaining estate." Like a lot of old English manor houses, Apethorpe Hall "became an approved school, which closed in 1982." 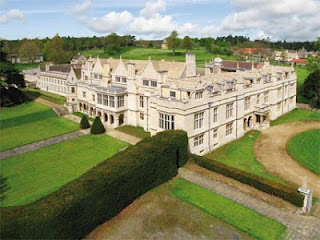 In short, the joint was abandoned. It fell to rack and ruin, snatched from destruction only by the timely acquisition of the property by English Heritage which, in 2004, "undertook a multi-million pound programme of rescue works, with the aim of selling the Hall for use as a private country house."

Apparently, they're not even going to try and get back all the dough they plowed into the place.

So -- here's a true bargain -- oozing with history and potential. You can invite your friends down for weekends. You can play Upstairs, Downstairs or Downton Abbey.

And did I mention that Rowan Atkinson lives just down the road in the Village of Apethorpe?

You could have him over to tea and maybe persuade him to reenact scenes from Blackadder in the very apartments where Queen Lizzie I once took a royal snooze. I believe House is going off the air; maybe Hugh Laurie can be persuaded to visit, too. Maybe he'll bring Stephen Fry.

And, of course, if you get them you can do Jeeves and Wooster too.

I know you're interested -- perhaps reaching even now for your checkbook -- so I should mention that there is one, teeny, tiny problem with the house.

But Eric Pfeiffer, on Yahoo! News (where I first learned of this -- and from whence I grabbed the two big pictures here) did mention in his article that there aren't any bathrooms in the house.

Forty eight rooms. Not one toilet.

Must have been a heck of a school. Now we know why the Brits are so famed for their reserve....
Posted by The Curmudgeon at 12:30 AM

Email ThisBlogThis!Share to TwitterShare to FacebookShare to Pinterest
Labels: History, Just for giggles, News and Views

The place was an Approved school run by the Northampton Diocese Child Protection and Welfare Society (the Society until it renamed itself The St Francis Children's Society in approximately 1977. It is still in existence and remains a registered Charity with the Charity Commission. It is the fostering and adoption services for the Northampton Diocese of the Roman Catholic Church which covers the counties of Buckinghamshire, Bedfordshire and Northamptonshire. The name of the hall was called St John's Approved School. The Society also ran a nursey in Sherringham Norfolk and St Francis' Boy's Home (Orphanage) Shefford Bedfordshire. The Society.

Thank you littlebigbrain. With that additional information I was able to find this report on line. There were bathrooms in the school -- and, I learned, the term 'approved school' was really an official English euphemism for 'juvenile prison.'

This once again shows the wisdom of George Bernard Shaw's remark, "England and America are two countries separated by a common language."