I was clicking away merrily last evening, catching up on a couple of sites, Stumbling, fretting over why my beloved Sitemeter has abandoned me -- (Miss Bee tried to warn me about this -- but I thought she said I'd go blind. Oh well.) -- and I wound up on this March 12 post on Ellee Seymour's site -- and that led me to The Great Firewall of China -- a site that tells you, supposedly, if your site would be banned in the Peoples' Republic of China. 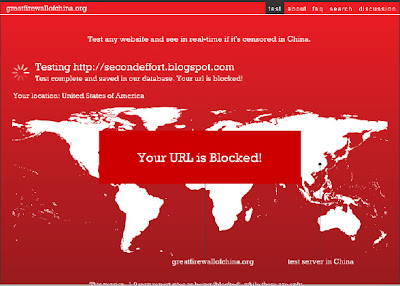 I'd like to think I'm banned because of posts like this one from July, talking about our growing dependence on Chinese imports and the problems caused thereby. On the other hand, maybe they just have standards....

You can say this much for Second Effort: I may not have a lot of readers, but it's a diverse group.
Posted by The Curmudgeon at 7:00 AM

So you are a rebel too, that's amazing. I think there are quite a few of us around. I wonder if your fellow readers will try the test too.

awww fudge curmie, who cares? i've been banned too so don't worry about it, now technotati, THAT i am worried about, i am now not only near 500, i am slipping in the low 200's!!! yeesh.

I've decided to believe that I'm not REALLY banned in China.....

It's just like one of those tarot card readings online.

Guess there are worse places to be banned from.


Have a great day.