No hot takes on Dobbs: Curmudgeon offers opinions that can upset everyone on all sides, at least to some extent

This image, of what looks like a letter to some unnamed editor from a Mr. Robert Veitch of Richfield, has been making the rounds in my social media posts of late: 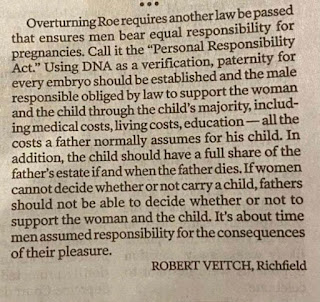 Here is the text of what appears in the image:


Overturning Roe requires another law be passed that ensures men bear equal responsibility for pregnancies. Call it the "Personal Responsibility Act." Using DNA as a verification, paternity for every embryo should be established and the male responsible obliged by law to support the woman and the child through the child's majority, including medical costs, living costs, education — all the costs a father normally assumes for his child. In addition, the child should have a full share of the father's estate if and when the father dies. If women cannot decide whether or not carry a child, fathers should not be able to decide whether or not to support the woman and the child. It's about time men assumed responsibility for the consequences of their pleasure.

Some of my outraged progressive friends on Facebook are posting this as if it were some thunderbolt from the blue -- take this you nasty Pro-Lifers! As if this were some new, threatening, and hitherto unknown concept.

I am not endorsing a specific statutory proposal, not that one has been made, but it seems to me that this letter reflects what IS and what SHOULD ALWAYS HAVE BEEN the correct attitude. Women should always have insisted that any man capable of completing the marital act, inside or outside of wedlock, should bear the consequences, should any result. Duh.

And any male of the species who desires to be called a "man," and not just a sperm resevoir or animated sex toy, should embrace responsibility for one's offspring as eagerly as he embraced said offspring's mother.

Of course, we have paternity laws now, and "men" who evade them, leaving their children to be raised by over-stressed single mothers or, worse, as wards of the state. Such "men" should be shunned and shamed. And society should do all possible to provide for the spurned mother and her child.

But I promised not-hot takes on Dobbs. Here they are:


Finally, the dissent suggests that our decision calls into question Griswold, Eisenstadt, Lawrence, and Obergefell. Post, at 4–5, 26–27, n. 8. But we have stated unequivocally that “[n]othing in this opinion should be understood to cast doubt on precedents that do not concern abortion.” Supra, at 66. We have also explained why that is so: rights regarding contraception and same-sex relationships are inherently different from the right to abortion because the latter (as we have stressed) uniquely involves what Roe and Casey termed “potential life.” Roe, 410 U.S., at 150 (emphasis deleted); Casey, 505 U.S., at 852. Therefore, a right to abortion cannot be justified by a purported analogy to the rights recognized in those other cases or by “appeals to a broader right to autonomy.” Supra, at 32. It is hard to see how we could be clearer. Moreover, even putting aside that these cases are distinguishable, there is a further point that the dissent ignores: Each precedent is subject to its own stare decisis analysis, and the factors that our doctrine instructs us to consider like reliance and workability are different for these cases than for our abortion jurisprudence.

Justice Clarence Thomas, bless his heart, did provide some kindling to stoke the fears of all the "experts" in his separate concurrence. But he joined the majority opinion, which means he subscribes, whether he likes it or not, to the above statement. And the attack in his concurrence is on the legal doctrine of substantive due process, which underpins those other cases, not on the 'rights' to contraception or gay marriage as such. And none of the other justices joined his concurrence. He is on an island on this one and there is no reason to think that any of the Trump-era justices plan to join him there.

Posted by The Curmudgeon at 4:29 PM No comments:

Email ThisBlogThis!Share to TwitterShare to FacebookShare to Pinterest
Labels: Decline and Fall of Western Civilization, News and Views, Roadkill -- politics in the middle of the road
Newer Posts Older Posts Home
Subscribe to: Posts (Atom)