A marriage made on Tinder? A somewhat apologetic introduction to a story I may never actually tell

So... this could be -- and may eventually be, I think -- a cute story about the marriage of one of my many cousins' many kids. But the story wouldn't make sense unless you know what Tinder is. Long Suffering Spouse assumed it was just another dating app -- but, as you may or may not know, Tinder has little or nothing to do with "dating" in any conventional sense.

So... I thought, for purposes of the story, maybe I should find and link an article that explains Tinder to those who, like Long Suffering Spouse, might not understand what Tinder actually is. This morning, I found an August 2015 Vanity Fair article by Nancy Jo Sales entitled, "Tinder and the Dawn of the 'Dating Apocalypse,'" -- but, after reading it, I am so depressed I don't feel much like telling my little story.

You know how to make a man a feminist? Give him daughters -- and granddaughters. Now, of course, the 'woke' feminists (you'll have to do your own research on what 'woke' means -- I'm researched out for the day) wouldn't have me. Which is fine. I don't subscribe to a lot the ideological nonsense that so many self-proclaimed feminists espouse. But I do understand how awful I feel for the poor young women interviewed for Ms. Sales' article. I hope that most, if not all, of them have found some happiness and fulfillment in the intervening years (the article is three years old already) -- but I fear they have not.

And I realize, now, better, after reading this article, why one of my cousin's wives was giving us the Death Glare as we boys chortled at the wedding reception dinner. Her daughters are younger than mine. And still single. She has to deal with this horrifying Tinder "culture."

I still think it's a good, funny story. But the Death Glare and the linked article make me cautious about the telling.

So I'll have to come back to it.

Soon, I hope. But not this morning.
Posted by The Curmudgeon at 9:52 AM No comments:

Random observations, each worth exactly what you paid for it

Posted by The Curmudgeon at 10:26 AM No comments:

So what's all this "Blue Wave" stuff we've been hearing about incessantly these last several months?

Well, the True Blue Believers think a "Blue Wave" of energized, mad-as-Hell Democratic voters will turn out at the polls next week and turn out all the Trumpsters and Trumpettes and their (often very reluctant) Fellow Travelers in the Republican Party. The House of Representatives will turn from Red to Blue, and maybe the Senate, too!

I'm not Nate Silver, but I have lived awhile. And I've studied history besides. So I have an opinion -- a prediction, if you will.

Now, of course, my prediction, as is true of all predictions, mustn't be taken too seriously.

If I could really predict the future, I would have picked the same numbers as the lucky winner of last week's $1.5 billion Mega Millions drawing and split the pot. I might even have gone to South Carolina, elbowed aside the would-be winner, and gotten the sole winning ticket for myself.

And that didn't happen.

Also, of course, I've been wrong before. I thought no one would vote for Donald Trump. Ever. That he'd be laughed out of the Republican primaries in 2016 once actual votes were cast. Hoo boy, was I wrong. And then I thought there was no way in Hell that Hillary Clinton could lose to Trump. She might have been the worst Democratic nominee since James Buchanan, but Trump was such a nonsensical alternative. I was actually willing to believe that Bill and Hillary put Donald Trump up to running, directly or indirectly, in hopes of sowing such chaos amongst the Republicans that Hillary's coronation was assured. (You know, I'm still not certain she didn't have a hand in it. No, seriously.)

Anyway, I was wrong. Just like just about every pundit in America. Only no one paid me for my totally wrong predictions.

Nevertheless. I have an opinion here and, while for the reasons aforestated I make no warranties or guarantees, you can bet heavily on this one. Really.

My prediction is that the Democrats will gain seats in the House. Maybe enough to flip it to Blue. They might even pick up a Senate seat or two.

So is that the "Blue Wave?"

The President's party -- whether the President is Republican or Democrat -- almost always loses seats in Congress in the off-year election.

The only recent exception was 2002, when the Republicans gained a handful of House seats -- but it was only a year after 9/11 and Bush the Younger's popularity was at its peak.

And the pundits will tell us that this was a referendum on Trump, Trump, and more Trump. Especially if the Republicans' narrow margin in the House and/or Senate disappears. As is entirely possible. 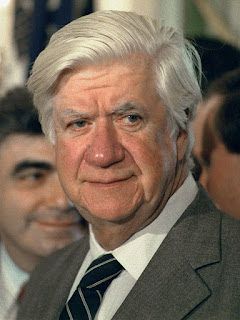 But that's all a bunch of hooey.

See this guy on the right?

This is the late Thomas P. "Tip" O'Neill, former Speaker of the House of Representatives. A Democrat. But a Democrat at a time when one such could go to the White House and enjoy a stimulating beverage with a Republican President (Reagan) and not be branded a blood traitor.

Yes, kiddies, there was such a time in America. And in my lifetime, too.

Anyway... all the Anti-Trump voters will cancel out the Anti-Anti-Trump voters (and the pro-Trump voters, too, hard as it is for me to conceive that there could be such persons) and the election will actually be decided in accordance with the wisdom dispensed by the late Mr. O'Neill: All politics is local.

Next week, the people who will decide this mid-term election will vote (if they haven't voted early already) in accordance with their own interests. Their local interests. Are their taxes too high? Are home values rising? Do they have jobs? Are their kids' schools doing well or badly? Are the streets paved? Do the bridges look to be in good repair? Do they feel safe enough in their homes? At their places of work or worship? On the street?

My neighbors may reach -- and almost certainly will reach -- conclusions on these questions that differ from my own. That's why I'm a Curmudgeon, I guess. One of the reasons, anyway. But those will be the decisive questions. As they always are. And should be, Trump be damned. As he almost certainly is anyway.
Posted by The Curmudgeon at 9:29 AM No comments:

Email ThisBlogThis!Share to TwitterShare to FacebookShare to Pinterest
Labels: Roadkill -- politics in the middle of the road
Newer Posts Older Posts Home
Subscribe to: Posts (Atom)