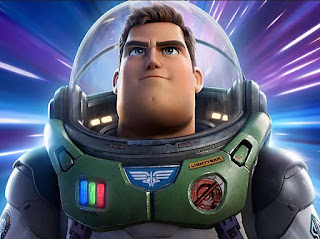 The premise, or conceit, of the new Disney/Pixar movie, Lightyear, now showing on Disney+, is kind of cute.

The idea -- and this is not a spoiler since it is shown before anything happens in the movie -- is that Lightyear is the movie that "Andy" saw in 1995, launching his desire for space toys, Buzz Lightyear in particular, and ultimately jeopardizing Woody's primacy among the toys in Andy's bedroom.

Get it? Except... the original Toy Story was released in 1995. It was not set in any particular year. In a range, perhaps, between 1965 or so, when every other primetime TV program stopped being a Western (when Star Trek beamed into our living rooms for the first time), and, I don't know, maybe sometime in the early 1980s, when every Summer or Holiday blockbuster movie came with its own merchandising campaign. A lot of great stories are set in an indeterminate past to maximize the audience to whom the story might appeal.

The kids who saw the original Toy Story weren't the real target audience for the film, or certainly not the only target audience. It was parents -- such as Boomers like me, who remembered cowboy toys and lived through the excitement of the Space Race, or GenXers, who were the targets of merchandising campaigns for Star Wars toys. The Toy Story films were not just children's entertainments about talking toys in a nursery; that concept had been thoroughly explored in the Raggedy Ann books a generation or two earlier. The Toy Story movies touched the memories of the ticket-buying parents, bringing up their own memories of childhood.

But I could get past that easily enough. Entering into a movie or play is all about (or usually about) turning off your skeptical self and suspending your disbelief. So... OK, then... I'm watching a movie "made" in 1995....

But then came the controversial bit. It's not even fair to call it a plot twist. It's almost a throwaway, really. Backstory. Under the circumstances, it made sense that the character in question would find someone with whom to settle down. The identity of the person chosen is not important to the story, really; it could have been anyone. The person chosen is so tangential to the plot that said person has no lines in the script. Not a one. In 2022, the choice made causes more shrug than shudder.

Not to mention getting the actual 2022 release banned, or rated for adults-only, in many parts of the real, non-Hollywood world.

It was a totally unforced, unnecessary error.

But that's only the beginning of Lightyear's problems.

It contradicts the Lightyear origin story hinted at in Toy Story 2 -- without improving on it in any way. I don't think this should count as a spoiler alert, but there is a temporal twist in Lightyear -- a twist that was handled better, and more credibly, in (believe it or not) The Lego Movie 2: The Second Part. For a studio that has prided itself on great, layered storytelling, that is a harsh criticism. 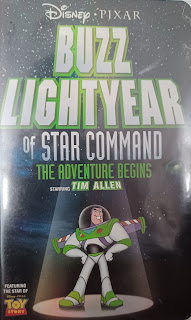 Disney/Pixar did a better Buzz Lightyear origin story in Buzz Lightyear of Star Command: The Adventure Begins, a 2000 direct-to-video release (with Tim Allen voicing Buzz). The makers of the new Lightyear movie had obviously seen that movie, and the Buzz Lightyear TV show, where Patrick Warburton did a pretty good Tim Allen imitation. Some of the robots in the new movie reflect at least a passing familiarity with these precedents. Buzz's dislike of rookies is another plot element brought forward from these prior projects.

But the new Lightyear makes Buzz's cockiness a cover-up for his deep-seated, and frankly understandable, self-doubt. I don't think the Buzz in the new movie would inspire a gazillion kids like Andy to aspire to infinity and beyond.

I get that the makers of this movie wanted to 'humanize' the cartoon character. But a little less angst and a bit more hard-earned success and triumph for the title character would have gone a long ways to rescuing this movie.

It's a pretty film -- Pixar still knows how to do visuals -- and there are some ideas of relativistic physics and tidally locked planets that might have been interesting elements in a better movie. The talking cat-robot was a reasonably fresh take on the Disney talking-animal-companion trope (but the cat would have been prominently displayed at Al's Toy Barn if Lightyear had somehow been the movie that Andy saw).

I didn't hate Lightyear; it's just not that good.

And, especially with Pixar, I'm always hoping for better.
Posted by The Curmudgeon at 11:46 AM No comments: