Road trip! Impressions of a brief trip into Cheeseland 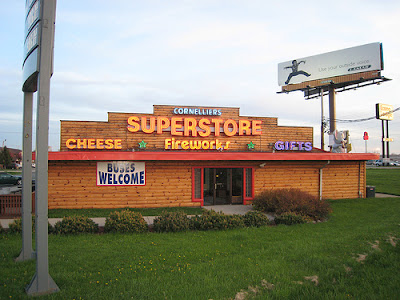 Image from edkohler on Flickr
This probably isn't the cheese shop we saw as soon as we crossed the Illinois border early Saturday afternoon, heading for Youngest Son's weekend baseball tournament in Beloit, Wisconsin... but it's representative.

We stayed in Janesville, just a bit north of Beloit, which is due north of Rockford. If any of that means anything to you.

Illinois residents call Wisconsin residents "cheeseheads." It is (usually) only a mildly derisive term, especially because so many Illinois residents vacation in and even have second homes in Wisconsin. (During football season -- when the Bears play Green Bay -- the word can take on a more hostile connotation.)

Wisconsin residents call Illinoisans "flatlanders" and raise a revenue off the speeding tickets they issue to unsuspecting tourists. (Thankfully, we got through the weekend without incident.) Wisconsin residents think Illinoisans drive too fast: I remember seeing a billboard for a greyhound track in Milwaukee a few years ago. The billboard showed a racing greyhound in full stride -- and the billboard read, "Faster than a car with Illinois plates."

On the other hand, Illinoisans think Wisconsinites are overly hung up on rules and regulations -- you know -- like speed limits. They call it good government. We call it Germanic. I had a history professor in undergraduate who'd also taught at Marquette (in Milwaukee) who insisted that if the traffic signals were ever to fail in Milwaukee people would starve to death in their cars before attempting to move. And maybe some day I'll tell you how I got arrested in Milwaukee for jaywalking. The good news is that, because so many Wisconsinites are of German stock, there seems to be a tavern every few hundred feet.

The hamburger joint where we ate dinner Saturday night served wonderful milkshakes... and had a separate counter where milkshakes and other dairy treats could be ordered. That same counter also had four beer taps.

And even though we weren't that far north of Chicago, the Sun definitely set later on Saturday night than it would have at home. It was only 15 minutes or so... but it was noticeable.

Most of the Raptors and their parents stayed overnight at this same hotel. We didn't see them until breakfast on Sunday (an early breakfast because we had an 8:00am game). But the Raptors won both their games on Saturday and I suppose a lot of the parents went out as a group afterward. There was another kids' travel team staying at the same hotel -- and three weddings besides. This made for some interesting contrasts in costume in the lobby and the elevators.

I saw a couple of the wedding guests Saturday afternoon. From a distance, they seemed like a nice-looking young couple, neatly dressed. The young woman had on a short dress, but not too short. But what caught my eye was on the side of her right leg: From a distance it looked like mud had been splashed on her. As I got closer, however, I realized it was just a tattoo -- a huge, dark green tattoo, on the side of her leg from about the top of her shin all the way to the bottom of her ankle. I didn't linger to figure out what it was a representation of; call me old-fashioned, but I thought it decidedly unattractive.

Sunday morning, as I was loading up our van, I saw an SUV parked in front of the hotel. The SUV had Wisconsin plates... and two large decals in the rear window: On the left a large number three... and on the right, a large number eight. (These are the numbers on the race cars of the late Dale Earnhardt and his son, Dale Earnhardt, Jr.) I thought NASCAR enthusiasts were largely confined to the South, but the contagion is obviously spreading. Maybe this Wisconsinite was attracted by the German-sounding name. Or maybe the owner of this vehicle was a Wisconsin policeman, dreaming of writing tickets to people that drive even faster than flatlanders....

We lost our game Sunday morning... but I wasn't too upset... considering that the team we would otherwise have faced in the championship game yesterday afternoon was playing a game on the adjacent diamond at the same time as our game -- and this team dispatched a team we'd barely beaten on Saturday by the score of 18-1.
Posted by The Curmudgeon at 10:53 AM

I met another American up here--a pretty rare occurrence, even in high tourist season. When I found out she was from Wisconsin, I exploded --affectionately, or so I intended, "cheesehead!" She was not amused. No amount of explaining that I was a Hoosier or a sucker or a fellow midwesterner could get around that initial misadministration, so I will use it very carefully in the future.
Thanks for good story, but sorry about losing the game.

oh i didn't know cheese head was a bad thing! oops. number one granddaughter's boyfriend (soon to be fiance') is from wisconsin. guess i shouldn't call him that any more? he didn't seem to mind too much, but i sure don't want to do it wrong. i just thought it was cute, and btw, so is he!!

I'm going to leave it at a simple confession. I grew up in Michigan but have been in Atlanta for twenty years. I went to my first NASCAR race in '88. Dale was a wonderful iconclast. Win, lose, turned over on the roof of his car, his comment afterward was something along the lines of "that's racin'" He gave no quarter and expected none.

Interestingly and sadly, he died blocking, giving no quarter, for his son. Maybe stupid, but in a strange, old world way, if that's a correct phrase, honorable.

I guess I'm getting curmudgeony. The new NASCAR just isn't the same. Jr. and his contemoraries, to misquote Sen. Bentson are "no Dale Ernhardt."

this is really WAY off topic and I am sorry. I have a post up that I would really appreciate your input on, if you find time and wish to comment. I treid to find an email addy for you but didn't see one.

Excellent blog!
Have you a nice keyring?
Please, send me its photo
and the link of your blog,
I'll publish in my blog!
Thank you
My email: nicekeyrings@gmail.com

Curmy, not only have I been through Rockford, but Freeport and Galena as well, on my way to Dubuque...haven't been to WI, but beer and fried cheese sounds good...

Actually, I think that is the cheese shop in Beloit, WI. One of my coworkers took that shot with my camera on a drive back from Fort Wayne, IN to Minneapolis, and I think we decided to stop for some cheese after crossing the border from IL.