The BlogHer Conference is in Chicago this weekend and, speaking as a taxpayer, I wish to welcome you all to my fair city.

The money you spend here helps defray my taxes -- so spend all you can!

Conference attendees may be to busy to sightsee during the conference itself, but for your traveling companions and for your own consideration before and after the conference, may I suggest some things you might want to see?

That North Side baseball team is out of town this week... but the Chicago White Sox are at home through Sunday. Detroit is in town through Thursday; the Toronto Blue Jays are in town for the weekend.

Yes, the Sox are having a tough year... OK, an awful year... but that just means you should be able to get tickets. And you can't beat fun at the old ballpark.

U.S. Cellular Field is accessible by the CTA Red or Green Lines.

And, speaking of the CTA, if you're coming in or going to O'Hare, and you don't have too much luggage, consider taking the Blue Line train. It goes right into the airport. The Orange Line goes right into Midway Airport, too. Check with your hotel about how best to get to your hotel from the train.

The BlogHer Conference is at Navy Pier. There is a Billy Goat Tavern there... but the one you want to visit is on the lower level of Michigan Avenue. 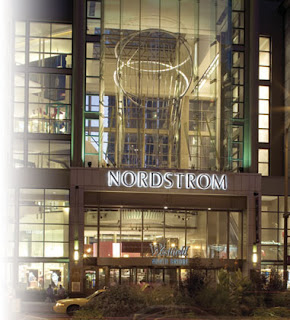 You may want to get over to Michigan Avenue... that's where the fancy stores are. The closest mall to the Billy Goat is North Bridge Mall.

Here's a link to a site called Concierge Preferred that lists and links all sorts of North Michigan Avenue sites. It will come as no surprise that an old Curmudgeon such as myself is less than helpful when it comes to making shopping recommendations.

Actually, I used to have an office in the River North neighborhood; the firm I was with then owned a converted three-flat-with-a-garden. We all swore to bring in our spouses (this was an all male group at the time) from the West -- past Cabrini Green -- never from the East. 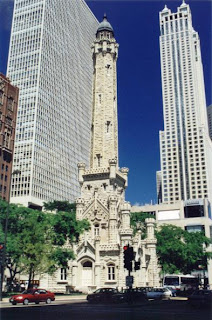 Twenty years ago, when we set up shop there, it was still a pretty gritty urban streetscape from our block on west. But the Water Tower was only a couple of blocks to the east. And we didn't want our wives to know how close we were to the stores....

And the area has only improved since.

Millennium Park (and "the Bean") are south of the Chicago River along Michigan Avenue. That's almost an obligatory travel photo at this point. I think the fountains with the animated faces (also at Millennium Park) are kind of creepy... but that's me.

You're probably already planning to stop at the Art Institute. That's just south of Millennium Park, at Adams and Michigan.

You may recognize this fountain: Buckingham Fountain, in Grant Park. This is located south of the Art Institute, east of Michigan Avenue. I've been assured by Chicago cabdrivers that this fountain has an alias, one supplied by German tourists -- Bundy Fountain. (Click on the link to find out why.)

And Saturday night is Venetian Night in Chicago. The boat parade up the lakefront from the Shedd Aquarium to the Monroe Street Harbor is followed by a huge fireworks show.

Some BlogHer attendees may be Oprah fans. Whether you are or not, she's one of our biggest industries all by herself. If you don't already have tickets for her show, it's probably too late to get them for this trip. But if you get into the West Loop area, you may want to see Harpo Studios where Oprah's shows are taped.

If you're going out that way anyway, you might want to time your trip around Mass at Old St. Pat's, at 700 West Adams, one of Chicago's oldest Catholic churches. The interior is gorgeous. And if you stop by on Sunday morning, you just might see Mayor Daley. Unless he's out of town again.

I could brag on my hometown all night, but I'll restrain myself.

Enjoy your stay.
Posted by The Curmudgeon at 6:22 PM

Gosh, I really like Chicago. Wish I were going to Blogher.

curmy i have never been to chicago, but some of my kin have, ha ha...

Wow - I gotta get to Chicago one of these days! They best I've ever done is one drive-through and numerous trips through O'Hare.

Chicago is a great place - and it's so refreshing that you love your home so much.

My husband and I spent a week in downtown Chicago 18 years ago. In the winter.

The occasion was Founders Week at Moody Bible Institute. We really had a great time doing it all. It was cold. That, I shall never forget.

All that talk about Chicago has made me even more homesick. I love Millennium Park. I took a segue tour around there a couple years ago. It was a hoot. Art Institute is a fave of mine, too. My grandsdon took art classes there a couple summers ago. Chicago, in my book, is a great town. I'll be back soon. Meanwhile, look after it for me.

I love the Stained Glass Museum at Navy Pier!

thanks for the tour "Homey"

just catching up - life has been full lately!