Now I know I'm not supposed to do this... but I do still check from time to time during the course of the day to see how the ol' Sitemeter is clicking along.

Today I was shocked to see this: 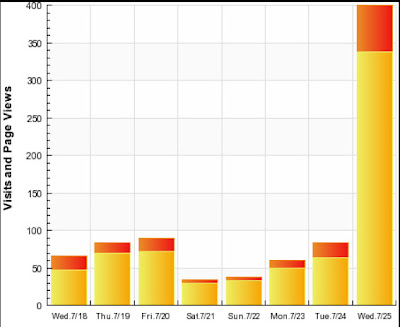 What was responsible for this? Had I suddenly "gone viral" on something?

(I believe that's now supposed to be a good thing, right?)

So I started looking at the "referrals" to see what was driving people here. One was from someone looking for the "Closest Costco to Cooperstown N.Y." Which, as regular readers know, is something about which I blog all the time....

But most -- nearly all -- of today's hits came from Google searches that directed them to either this January 2, 2007 post or this January 31, 2007 post -- both of which concerned Chrissy Popadics, the Boise State cheerleader, whose boyfriend, Ian Johnson, proposed to her, live on national TV, minutes after scoring the winning points in a monumental upset of heavily-favored Oklahoma in the Fiesta Bowl.

I thought my initial post on the subject was pretty good -- but surely dated by now.

But then I looked to see what the hot searches were today on Google. Look what I found out:

Why was Chrissy Popadics such a hot search all of a sudden?

Knowing full well that my blog did not have the answer, I started noodling elsewhere around the Internet. Here's the deal: Chrissy and Ian are getting married this Saturday.

What should be the happy ending to a feel-good story has been somewhat tainted, however. According to this AP story posted on ESPN, Johnson has been obliged to hire security for the wedding after receiving "phone calls, 30 letters and, in some instances, personal threats from people who objected to his plans to marry Popadics." Johnson is black; Popadics is white. Johnson told the AP that, in light of the threats, it would be naive not to take precautions. "We're going to make sure we're safe at all times. It's an amazing day for us, and we'd hate to have it ruined by someone," Johnson said.

So now you know.

Best of luck, Chrissy and Ian. Congratulations. May your lives together be long and happy... and, uh, I'm really sorry I never RSVP'd... but, you know, somehow, I never actually got your invitation.... But it's OK, really -- we have a baseball tournament with Youngest Son this weekend anyway so we probably couldn't attend....

You just never know what's going to send traffic your way, do you?

And kind of an instant update -- I'm also starting to get traffic from the Bestest Blog of the Year site. Now every time I've clicked on that URL I've gotten a different blog -- once it was this one -- framed by the Bestest Blog of the Year banner. Bestest Blog's proprietor, Bobby Griffin, explains this latest contest on his original blog. I'm not certain I understand it yet... but if you're coming here from there: Welcome. Come back again.
Posted by The Curmudgeon at 6:01 PM

smiles, and congratulations on all the traffic! bee

I don't understand his new blog.. I have added his link back though. The original link.

'Bear Grylls Naked' has been bringing me 200 hits a day for the last month now.