After the ball is over... cicada farewell 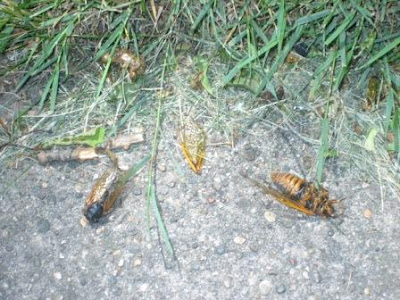 This song seemed appropriate as the current brood of 17-year cicadas vanishes once again.

The sad scene above is from our driveway, about four weeks ago. As soon as the party began... it began to end.

There were still a couple of hardy cicada dowagers flapping around nearby Park Ridge, where we saw them at a baseball game Monday evening. (The males tend to die out first, so I'm guessing the stragglers were female. Otherwise they were very frustrated males.) 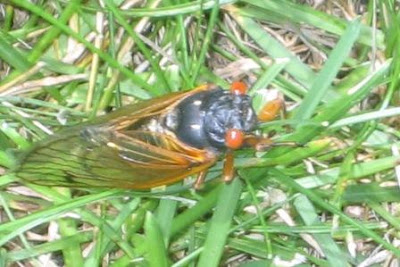 In the brief span between Memorial Day and the Fourth of July an entire generation of these creatures lived and died. 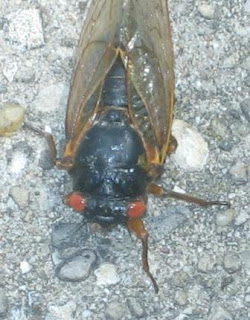 These pictures were taken by Long Suffering Spouse on June 8.

This one flew in to pose for her. And, yes, it appears to be missing a foreleg. 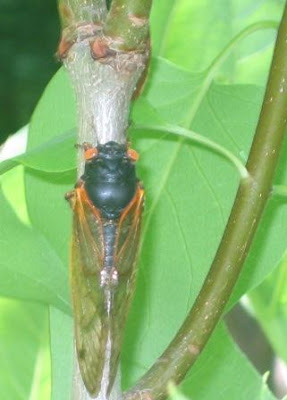 Long Suffering Spouse humored me by taking these photos. She was initially concerned that I'd want pictures of bugs. 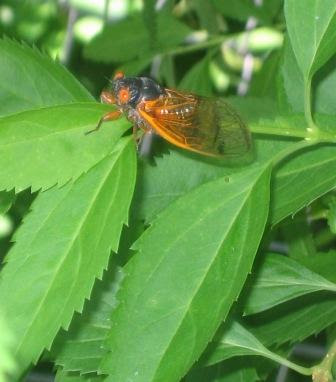 But when she printed these pictures out, I think she finally agreed with me that these are fascinating creatures....

So alien-looking... but in our own backyards.

But not for another 17 years. Good night, cicadas. 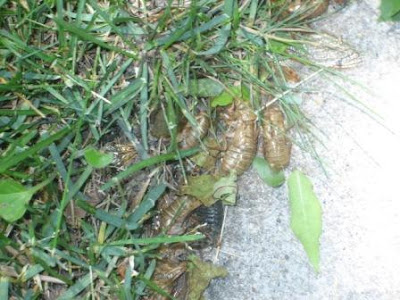 Posted by The Curmudgeon at 2:10 PM

I've always been especially fascinated by these little guys. They are gross looking, and yet kind of cute all at the same time.

Thanks to LSS for great photos. Good post, too. I miss cicadas and lightning bugs over here. There is a pair of gulls that love cirlcing and swirling like swifts do when they are stirring up bugs. I don't know what kind of bug the gulls are after but they make good watching in their hunting.

Love the photos your spouse took. And I knew part of that song too. ;-)

Our last outbreak in TN had us shoveling the darn things...yes I said SHOVELING the things from sidewalks, etc. Driving down the interstate and seeing huge piles of those things is just nasty!