A story I could not leaf alone: Man dressed as tree sticks up branch bank

I heard about it on the radio this morning. I then saw a small story about this incident in the Sun-Times, but before posting about it, I branched out across the Web in search of more facts... because I was afraid that otherwise you wood not be-leaf it. Here's the security photo: 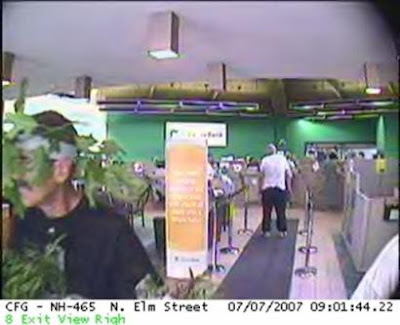 According to several sources on line, including the AP, someone claims to have recognized the man in this photo and police subsequently arrested James Caldwell and charged him with the robbery.

The AP story quotes police Sgt. Ernie Goodno in its story: "He [Caldwell] really went out on a limb."

And did you notice the address on the security photo? The Citizen's Bank branch in question was located on Elm Street in Manchester.

Don't bark at me if you think that's improbable. Why do you think I linked you to my source?

I wonder if, at Caldwell's first court hearing, his attorney will seek a lower bond on the basis that Caldwell has strong roots in the community....
Posted by The Curmudgeon at 12:23 PM

Let the PUNishment fit the crime or Leaf and let leaf. The potential for this is endless, isn't it?
I'm guessing that he was sent in for a psychiatric observation.

Oh my gosh that is hillarious!I woodn't have be-leafed you if I didn't see it.

a nut tree for sure

Perhaps bank robbing ran in his family and the apple didn't fall far from the tree?

I thought that camouflage of this sort worked best in nature, you know, the woods...if it was that convincing, shouldn't a dog have peed on that tree?

I can't think of a desiduous or conifer thing to say.

what else would you call this? other than a ridiculous attempt at humor and crime?

We have been in his blog and have found it very interesting, congratulations regards from Catalonia - Spain

In Britain, we would say he was working for Special Branch (part of the police force).

You seem to have got to the root of the problem...

I saw this on our local news too!

Perhaps you could say he had his own nightmare in Elm Street, har! (Sorry couldn't resist.)

Hee hee... I certainly could have used this post to help "brush" up on my punning skills last week!

Everyone else has taken all the good puns!