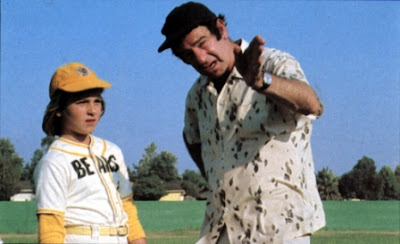 It's been a tough season for Youngest Son's travel team, the Raptors (as I call them here); this past Wednesday night they played a doubleheader against two different teams -- and lost both by "slaughter."

Slaughter rules, or mercy rules, differ from league to league. In the Raptors' league, the game is called after five innings (instead of the seven the boys would otherwise play) if one team is ahead by 10 runs or more.

And they lost by slaughter Monday night, too.

In fact, after Monday's debacle, the coach took the team out into the outfield to run -- a punishment -- and he yelled at them so loudly that the parents, hovering nervously at the foul line, could hear. Long Suffering Spouse and I could hear him, too, and we'd walked halfway back to the car.

The parents were upset. Now, this is not a rant against the team parents. I suppose I was pretty harsh on them in my recent essay on their treatment of the Amish Umpire, but these are not bad parents. It's just... well, they're not sports parents. They're not used to coaches yelling at their kids.

But that's what coaches do. If they didn't yell, the kids would think they didn't care. Even I yelled from time to time (OK, I howled in incoherent anguish) -- and I was a terrible coach.

I don't think the Raptors' parents are dumb; they'll eventually figure out that you have to yell at kids, especially at young teenage boys, if you have any hopes of commanding their attention. But they were offended Monday night.

And, by Wednesday, they were fatalistic. One parent said we should change our name to the Livestock because we know so well what it means to get slaughtered.

It's an ugly, ugly mood on the club right now. I wrote last summer about Coach Earring and the game we won by forfeit and the mood wasn't as gloomy among those Bluejay Park Reds as it is on the Raptors now.

Even so, right now I think my Bluejay Park Reds could whomp the Raptors... no matter which team Youngest Son played for.

And the Raptors just go through the motions. They botch routine plays. They don't run hard on ground balls. They don't ever take the extra base. A lot of them just shuffle and galumph to their positions on the field -- the kids on other teams run... or at least jog. For the most part, the Raptors look lackadaisical, even disinterested. And no one gets benched.

This is quite different from our experience when Middle Son played travel ball, five or six years ago.

We drove several hundred miles, to Ohio, to see one of Middle Son's travel ball games. Actually, we had to go -- because the bus that took the team through Northern Virginia and up into Pennsylvania and then to Ohio wasn't coming back to Illinois. (That team really traveled.)

So we'd driven a long way to see Middle Son's game. And we got there with the game already in progress. Middle Son was standing on second base with two outs... and he didn't move on contact. I don't remember the exact situation; I think the batter got a hit and Middle Son failed to score. The coach called time and asked Middle Son if he knew how many outs there were.

Clearly, he did not know... and he was obliged to admit it.

The coach pulled him out of the game and he sat the rest of the night.

That may seem harsh -- and we weren't thrilled, obviously -- but it was the right thing to do. Middle Son learned a lesson about keeping his head in the game.

The Raptors coach hasn't been able to sit anyone the last couple of weeks, even if he wanted to, because he's only had nine kids for most games. But I don't think he wants to -- because he doesn't want to take flak from the other parents. In fact, as I've written before, I think he took a smaller roster into the season just so no one (meaning no parent) could complain about playing time.

I feel terrible for our coach at this point. He's clearly exasperated: Monday, even as he was yelling at the kids, he was pacing further and further away from them. He was setting out the distance they'd have to run, yes, but his whole demeanor suggested that he was too angry and frustrated to stand anywhere near them. This coach -- and his assistants -- have sacrificed an incredible amount of time for games and practices... and their efforts are not bearing fruit.

I want to offer words of comfort or support -- but the coach doesn't know me. Not like he knows the other parents... his social friends... who are still mad at him for yelling at their precious babies. I think he's a little skittish about parents generally right now: At a recent game, after retrieving up a long foul ball, I walked it back to the bench so the coaches could give it back to the umpire -- and I swear the poor man cringed, until I made clear the innocuous purpose of my very brief visit.

I never had trouble with parents when I was coaching, but I know something about losing. Actually, I know a whole lot about losing. So -- and here's the Dr. Phil-type question, if you're still with me -- what, if anything, should I say to show support for the poor guy?
Posted by The Curmudgeon at 11:18 AM

"Keep at it. You're starting to do the right thing. There are laws to protect you from the rest of the parents."

talk to a few of the other parents who are supportive of the coach and have them let the coach know how you feel. Offer to help on game day. All my kids played sports and the best coaches were the ones who yelled and worked them hard.

Just tell him as a coach you can sympathize, and as a parent, you understand. The less the better, I'd think.

It's not up to you to apologize for the rest of the parents, though clearly they owe him one (though you're right, they don't see it now).

shoot i am no help. here in podunk they don't even keep score for criminy sakes. some kid might get his little feelings hurt if his team wasn't the best. and at the end, they all got identical trophies. i swear. made me sick. my grandsons like to play basketball and soccer and they do play, but the game is not a sport, it is a game. sigh... (here i am in yet another sports thingy curmie!)

It's great that you can find the time to coach. Losing is always hard. We are well into Wimbledon here, our tennis highlight of the year, then it will be the football season.

We have had a very bad day in London today, btw, two cars were found with bombs which fortunately did not go off.

Oh Curmudge...I have been on both sides of the fence....coached and watched my daughters being coached....and I have to agree with most parents here..the best coaches I have seen have been the ones that pushed the kids...encouraged the kids to excel...some would call me competitive...I guess I am...I loved sports I loved to compete...I liked being pushed by the coach...I think had it not been for a coach I had in junior high we never would have made it to the provincials....sports are not just for sports sake but for learning some of life's experiences....

The truth is Youngest Son plays for the Cubs. Am I right?

Seriously I would say something humorous (see Dave's comment) to break the ice and then tell him he's being a good COACH. It honestly makes me ill these days about the "coddle the kids attitude" so they don't get hurt.

If we're talking about a 5 to 9-year-old child then that's different. But in my daughter's case (she's 10) she's already learning her strengths, talents, and her weaknesses.

I remember that age as a young lad. I wanted the coach to yell at me! I expected it. At least he noticed me and it meant I was going to or getting playing time.

Dang. I could write all day about this. I just might've found a blog entry idea.

Just telling him that you appreciate how much he cares for the kids and that losing is hard on everybody. what about talking to the parents about your experiences ad a coach to help them understand?
Gotta go. News is on now and I heard something about a bomb in Glasgow airport. I want to hear more about that. Still far away from us up here but closer to home.

I like Dave's remarks up at the top of this list... "there are laws to protect you from the rest of the parents" :)

hey - I tagged you! I hope you don't mind doing a meme today (or tomorrow - or whenever - I know you're a busy guy).

But you are my favorite Chicago lawyer - come see..

I would have said - "Hang in there, I'll see you next year, Coach".

My coaches in Little League, Pony League and High School were all screamers. They never really directed it at a single person, but guilty parties always knew who they were.

As B&B said above we expected the coach to yell at us when we messed up or lost a close game. I would get worst from my Dad on the ride home if I was the one to blow the game.

I believe that today's coaches have a harder time coaching because of the parents of their players. We are kinder and more gentle with our children than our parents were with us. Therefore you need a hard nose coach.

When I started playing Little League Baseball, my coach decided that I should play 1st Base (because I was tall for my age. After committing 4 errors in one game he moved me to Right Field. He quickly learned that I could not judge a fly ball, but kept in in the lineup because I could hit.

Finally he made me a pitcher - pitching every other game and playing Right Field during the others. I did this in Pony league and High School as well (my skills in the outfield had improved).

In College Ball I was strictly a pitcher but with a .280 BA. The coaches still yelled at me. I expected it.