Not a xenophobic rant -- just a modest proposal

Warning. I'm on the soapbox with this one:

Forbes Magazine reports that the White House has set up an import safety panel "to review import safety" in light of recent events.

The Pittsburgh Tribune Review reported on July 2 that since last October "about 60 percent of federal Consumer Product Safety Commission's recalls were for products made in China." The Tribune Review story noted how the FDA recently "clamped down on five types of farm-raised Chinese fish because they included 'antimicrobial agents' not approved for that use in the United States." If "consumed long-term," the story said, these agents might harm consumers.

Then there was the counterfeit toothpaste imported from China. 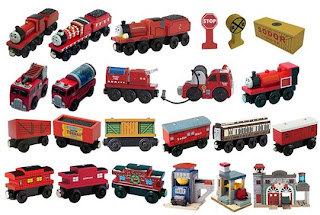 And how about the recall of Chinese-made Thomas the Tank Engine toys? Lead-based paint was the culprit there.

On July 19 Forbes reported that the Chinese
are disputing charges that automobile tires exported to the United States "were made without a feature which helps avoid tread separation." Nevertheless, American regulators have demanded the recall of 450,000 tires made by Hangzhou Zhongce Rubber Co. Ltd.

And talk about illegal immigrants? 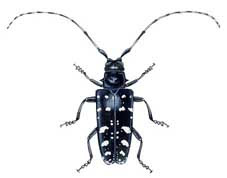 This is the Asian longhorned beetle. It came to America in packing crates carrying other Chinese imports. A January 2005 USDA publication said that this beetle "has the potential to cause more damage than Dutch elm disease, chestnut blight, and gypsy moths combined, destroying millions of acres of America’s treasured hardwoods, including national forests and backyard trees." When the beastie was discovered in some Chicago-area trees, those trees were taken down... and all the surrounding trees, too. Whole neighborhoods were denuded in order to keep the pest from spreading.

Now I do not pretend that the Chinese are sending us poisoned foods, shoddy goods and damaging pests as some sort of coordinated strategy. That would not only be bad business, it would be an act of war. Besides, I recently read that the Chinese are suffering through a domestic fake water scandal: counterfeit branded water -- "tap water or purified water from small suppliers put into the water jugs and sealed with bogus quality standard marks." An AP story posted July 10 on Yahoo! News clarifies that this is no minor matter because "Beijing's tap water is generally not safe to drink because of the city's aging pipes; boiling water leaves a white powdery residue inside pots and kettles."

And, just to show they're serious about cleaning house, the Chinese recently executed Zheng Xiaoyu, the former head of the State Food and Drug Administration.

So let's not waste a lot of time and energy hatin' (as the young people say) on the Chinese. The bottom line is this: We don't have to buy what the Chinese are selling. If their stuff is dangerous, we can make our own stuff. 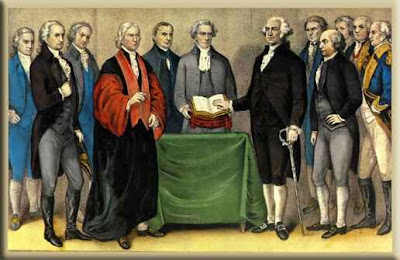 This is a picture of George Washington's first inauguration, in 1789. Washington made a speech on that occasion, certainly, but even in selecting his clothes for the occasion he sought to make a point: Washington wore a brown suit, domestically made, for the event. He was trying to encourage, even by his own costume, domestic manufacturing. Because a country that can't make its own stuff isn't really independent, is it?

There are idealists abroad in the world today who are certain that if all the nations of the world were interdependent on one another there could be no more war. And there are captains of industry who exploit these hopes and dreams and move factories and jobs to any place where their goods can be made most cheaply.

But I know this: The Confederacy had the better generals in the Civil War, but the Union had the factories and the railroads. Production capacity was decisive in that conflict.

At the outset of World War II, the United States had a military which, on paper, was about as strong as the armies of some Balkan countries. But the enormous production capacity of the United States was harnessed after Pearl Harbor to build the mightiest military in history. The Axis powers could not keep up -- especially after those bombs America was making started raining down. Production capacity was decisive.

And maybe Ronald Reagan could not have delivered on "Star Wars." But the Soviets had to build as if he could. While America made guns and butter, the Soviet Empire collapsed. Production capacity was decisive in the Cold War, too.

What is America's production capacity today? Where is it?

Protectionism may be the recipe for worldwide depression. And I tend to be in sympathy with the idealist, one-world camp myself. But must we move all our factories off shore? Will our skills at making movies or in handling mergers and acquisitions save us from future threats?

My modest proposal is this: Look at labels. All other things being equal, buy American. If you can afford it, and the cost difference isn't too much -- buy American even if it costs more.

And for any UK readers who've made it this far -- go ahead and buy British. I can appreciate that people should support their own local industries, in any country. For the same reasons. Unless, of course, you buy American. I'd be in favor of that, too.
Posted by The Curmudgeon at 10:53 AM

Email ThisBlogThis!Share to TwitterShare to FacebookShare to Pinterest
Labels: News and Views, Soapbox

Very well said! While we're at it let's stop outsourcing all those jobs!

we always try to buy american, always have, it's just really hard sometimes, like a tv or dvd. even autos, we always buy american brands. but we know the engines were made elsewhere. still trying anyway!

Ralph and I are convinced that the cat food tainted with that wheat gluten crap from China is what caused our cat's early demise. It makes me sad to think I inadvertently killed our furry little friend.

Curmy, you are right on. As Patti noted, Sir Humphrey met his demise by tainted foodstuffs imported from China. Do note that all Purina dry food (dry only) is made in America.

You are right about owning your manufacturing capacity, especially during war. The US manufactured over 100,000 airplanes during WWII, and the Imperial Japanese military and the Nazis could not keep up. In addition, the Regan era analysis is dead on.

Agreed, buy American always where you can. For clothing, if not USA made (and that is hard), at least purchase clothing made in this hemisphere, not in China. Your proposal is very modest – we can make the effort.

I like when you mount the box. Makes me think.

I'm a one world kind of guy.

At the time of the Revolutionary, Civil, First and Second World Wars, the world was not the economic structure it is today.

We, I hope, have seen our last adventurous war in Iraq, where we use our dwindling economic might. We will be paying for our adventure for the next several decades.

To my mind, the solution to our worldwide conflicts is a one world viewpoint. What hurts or helps me, helps or hurts you. What can be done to result in a win-win result is the question to be asked. China, even Iran, has no interest, and no ability to create war given economic reality. If we, the last remaining super-power and bastion of freedom can't afford to project our views on the rest of the world, how can they?

On second thought, get off your soapbox, your readers don't want to hear this stuff from me.

Aside from the economic issues, when we do not produce things ourselves, we get stupider. I don't mean we just forget how to make tires or any particular individual thing, but we lose the knack of sussing how things in general work. There is a hands-brain connection that we need to keep alive. Gandhi argued that a spinning wheel in every house was an act of independence. For any/all of us how many things can you (still) do? Sew a dress? Repair a tire? Knit a sweater? Mend a sock? OK, now I'll get off my soap box, but Curm raises a very good point, and I for one like it, Curm when you get on your soap box. Oh! That's another good one--making soap.

I am with you. I buy American cars (portions of most American cars are built here). I also refuse to work for or in another country. I will start looking at labels too.