Is there such a thing as too connected? Study reveals that people check email in the strangest places

Lyndon B. Johnson had telephones everywhere and he used them constantly -- even in the bathroom.

This was once considered rather gauche.

Today, however, it might be considered merely efficient. At least, that's my take on it after reading Howard Wolinsky's story in this morning's Chicago Sun-Times.

Wolinsky reports on a survey by Opinion Research Corp. for AOL (although I couldn't find anything about the survey on AOL this morning) which shows, among other things, that 47% of survey respondents in Chicago looked at their email while in the bathroom or restroom. 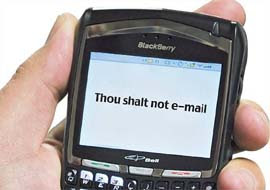 Twelve per cent of the persons surveyed nationwide confessed to peeking at their email while at church -- 22% of Atlanta churchgoers with mobile email systems check out their email during services while only 9% of Chicagoans do. There are several conclusions one might draw from this. Perhaps Chicagoans are more devout than residents of Atlanta. Or maybe Atlanta residents are just more tech-savvy than Chicago residents. But I suspect that the difference may be explained entirely if church services are longer in the Bible Belt.

I remember reading Studs Lonigan many years ago and how he had impure thoughts while attending Mass. Now, if you have an iPhone -- such as our old blogfriend Dr. A just acquired -- you could have impure illustrations to go along with the impure thoughts.

Not, I hasten to add, suggesting anything whatsoever about Dr. A! Or his thoughts.

And maybe -- if the sermon is boring but you're in a religious mood -- you could explore the 10 Commandments for Driving recently issued by the Vatican....

I don't have a phone that can check email. I have a cellphone, but it's a bit worn these days. The keypad no longer dials a 0 or an 8, at least not reliably. But even if I did have such a phone, I don't think I'd be tempted to use it: Long Suffering Spouse would probably kill me there and then. Besides, the widows of Nigerian generals or that very friendly fellow from Sierra Leone (he started out his spam email to me with "Hello Dear") can wait....

Although maybe I could pray that this latest one was for real....

But, no, the age of miracles is passed.

Posted by The Curmudgeon at 9:26 AM

I used to make fun of people which crackberrys, er blackberrys, who would check their e-mail all the time. Now, I plead guilty to the same crime - let the hypocrite comments begin.

The strangest place I've checked my e-mail? I think that would be at the dentist's office while getting my teeth cleaned. Well, hey, I heard the little "you've got mail" tone when I was sitting there, and just had to check. Plus, I wanted to impress my dental hygenist with my new iPhone - she wasn't impressed, and didn't even know what an iPhone was - oh well....

Well coming from a a long long time of having no connection at home and just getting it back, i will be too connected for the next couple of hours or so! :D

daily on a cruise ship! and i check my comments too...

Other than at home, The other place is at an internet cafe.

Well, I guess that would be airport in Hong Kong. I don't have a fancy phone and can't figure out half the buttons on the phone I do have so I rely on terminals of one flavor or another.

er... I am now more than ever endeared to the name and all its shining stigma of CRACKBERRY....

NEVER want to be that connected... I infact love leaving all phones and such in a pile and tell them to talk amongst themselves...

Out to the garden where I can see I have WEEDS!

Tourist info place in Times Square. Granted, it was free and I was killing time while waiting for my friend to get finished in the bathroom.