Why you have to read all the way through

I saw a link to this site over the weekend and, before I'd finished the second paragraph I was up in arms. Here's the paragraph in question, from a group blog entitled "That's Fit," this particular entry being authored by Bethany Sanders:

[D]id you know that recent research suggests that caffeine may be the new up and coming treatment for baldness? Researchers believe that caffeine protects hair follicles by blocking a chemical called DHT, which is produced by the male hormone testosterone. In fact -- and this was news to me -- experts believe that men with more testosterone in their bodies are at a higher risk of balding, especially when there's a family history of hair loss. DHT damages hair follicles, but caffeine appears to block that process and stimulate growth. In recent lab test, hair follicles exposed to caffeine grew an extra 33 to 40 percent.

Given the amount of coffee I drink, if there were in fact a direct correlation between caffiene intake and hair growth, every inch of my surface area should be covered with lush, luxuriant hair. 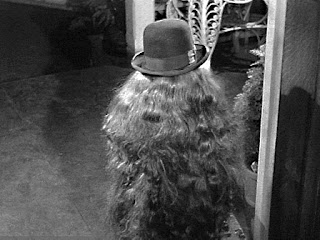 The Addams Family character I'd most resemble would be Cousin Itt -- not Uncle Fester.


Oh, yes, I'd worked myself into a fine dander.

But then I read more of the post in question:

....Researchers don't believe that drinking more coffee will affect your scalp -- or your hair loss -- in any significant way. In fact, you'd have to drink a heart-racing 60 cups of coffee to gain any benefit.... Instead, a German cosmetics firm has developed a caffeine-infused lotion that can be rubbed directly onto the scalp. If it works, it seems like a simple and natural solution.

Instead of going beserk like some jittery, hopped-up caffiene fiend, I read the article all the way through... and was mollified.

Meantime, although I'm not interested in trying any new German lotions or potions, I am thinking about using the morning coffee grounds as a scalp massage. If nothing else, the grounds might stain what hair there is a darker color....
Posted by The Curmudgeon at 8:59 AM

My immediate family is full of nearly bald men. They haven't tried much though, I think they gave up a long time ago.

I'm so used to bald men I don't really care. As long as the hair doens't migrate to the back, then I'm good.

Well, yes, Sean Connery is bald as an egg, as is Patrick Stewart. (That's two of my wife's favorites.) Women don't seem to mind them. So going bald was never really a serious problem.

It's just... never been reversible before.

Better not let LSS catch you doing that with her coffee :-).

well curmy if you do it (the coffee grounds thingy) wear gloves cause it will stain your hands and then everyone will know what you've been doing... see?

Hmm, coffee lotion. Might be a market for that. Folks who can't always drink their needed dose of daily coffee could always dab some lotion during the day and start smelling their hands for an instant caffiene rush. Wouldn't that be an interesting site.

My husband is losing his hair. Maybe I will massage is scalp with coffee grinds, too. ;-)

did you see the news story about the new caffeinated donut?