Mary Anne from A Place I call Home responded to yesterday morning's post about hair dyeing with some thoughtful comments. An extract:

Is not part of learning to learn how to become tolerant of one's differneces? Is that not part of education? Should we squash someones creativity because another person does not see it as being educational? What about art class, do we not promote creativity? Encourage individuality?

And this got me thinking. About indviduality... and I was already thinking about hair dye... and that led me to think about what kids wear.

When I was in high school, a generation ago, dress codes were toppling all over the country, often as the result of court challenges. We would now be "free" to express our individuality in how we dressed.

But what really happened is that we dressed according to new dress codes: the unwritten, ever-changing and often merciless code of whatever our "group" was. Jocks dressed like jocks. Freaks dressed like freaks... 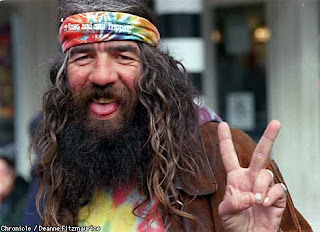 ...although no high school kid ever grew a beard like this. Ever. Except in his own imagination.

By the way, "straight" had nothing to do with gender preference in those days. Good heavens: In those days, "gay" meant happy.

I had a high school classmate named Gay.

So the language has changed. And so have the names of at least some of the groups. Maybe you went to school with Goths, Nerds, or Preps -- but the tyranny of the group over a kid's clothing choices has remained constant through the years.

The pendulum started to swing back in favor of dress codes when educators and, still later, courts began to realize that street gangs also had dress codes. Wearing the wrong sweater in the wrong school prove a fatal fashion faux pas. Quite literally. Many Chicago schools have dress codes now... and gangs have adapted by coopting the uniforms, in at least some cases, into their own "colors."

But that's a different story.

So here's my hypothesis: I think that kids don't develop or express their individuality in their clothing choices, if they're allowed to make these choices entirely "on their own." Because they won't make them on their own. They will instead make only those "choices" consistent with their group ethos.

So I suggest, if you want your child to develop a sense of individuality, dictate your kids' clothing choices to the extent you possibly can. While that sounds contradictory, the teenager who's not allowed to wear the "right" brand of jeans must develop a sense of individuality in order to withstand the scorn of his or her group. What are they supposed to do? Blame it on their parents? "My Mom made we wear these" will only work in the short term, if at all. Eventually the group will ostracize the child... unless the child persuades the group that these khakis, or the shirt with a collar, is really his own "personal" style.

Sounds like a dream doesn't it? And, if we're talking shirts with actual collars, it probably is.

And that's another reason why I like school uniforms. But I've already blogged about that.

It's going to be a busy day here at the Undisclosed Location, so I'm going to sign off now and probably not get back here the rest of the day.

Not even to check the Sitemeter. (Beads of perspiration already beginning to form....)

I can check the email for comments, though, can't I? (Hands starting to shake just a bit....)
Posted by The Curmudgeon at 9:36 AM

Go on. Just one more check of the sitemeter before you go... What harm could it do?

I'm all for school uniforms. My highschool was a fruitcake factory.

School uniforms are the way to go.

And about that sitemeter problem.... well, you know. We can always get you professional help:-)

I am all for school uniforms.

In High School, I never really knew what was 'in' so I never really dressed right. I did wear some really fun, quirky outfits, the problem was, since I didn't know who I was, my style changed every day.

I think school uniforms are the way to go. I could have spent all that time stressing out on outfits on something more productive.

What always cracked me up were the "goths." They thought they were sooo different, so edgy. But the goths of my generation looked exactly the same as the goths that came before them and the goths today are indistinguishable from my day.

So I guess the idea is to be different, but only as long as there are other people who are "different" just like you. :)

So I guess the idea is to be different, but only as long as there are other people who are "different" just like you. :)

Hit the nail right on the head... and this really never changes as we mature - look at the burbs - everyone there is "different just like you" If you live in the city - then you have variety and plenty of it! Especially in ChiTown...