A hair-raising issue -- or -- dyeing to get out of school

The on-line version of Stefano Esposito's story in this morning's Chicago Sun-Times is not illustrated. The photo which accompanied the story in the actual paper paper is too small to reproduce usefully here. It shows a normal looking young teenager, with mostly brass-colored or golden tresses -- and, as the story notes, a couple of quite distinct cranberry red streaks. Herwith Esposito's article, complete and unabridged... for a reason which I'll explain:

The 50-something educator doesn't approve of kids holding hands in the hallways or "romancing."

And when seventh-grader Holli Boam arrived Wednesday with cranberry-red streaks in her hair, Coleman sent her home to wash it out. The principal at the Chicago Heights school was taken aback Wednesday when he learned that Holli and her mom weren't going to comply.

"I'm surprised the mother would call you -- especially when we had such a wonderful conversation," Coleman told a Sun-Times reporter.

Coleman says it's a distraction. "The best way to resolve this is to rinse out that ink -- or whatever it is."

April Boam says her daughter is being singled out. Boam points out that Coleman has sent her daughter home half a dozen times for no good reason, including for a kiss with a boy.

"The only reason they come here is to get educated," Coleman said. "I'm not having any romancing going on."

The entire article is presented to illustrate a lesson in newspaper reading. Reading this story tells me that there's some "history," mostly unpleasant, between the principal and the girl's family. And it may have at least as much -- if not more -- to do with the young girl's burgeoning interest in boys than with her interest in hair dye. Or at least with the principal's perception of what the young girl is most interested in. That's why you shouldn't take sides on almost anything you read in the newspaper based on one article alone.

But the general subject of the article, about young girls dyeing their hair, is something which all too frequently becomes an issue for parents of girls. And I do have a side to take here.

Listen to the voice of experience.

My daughters had brown hair. It would lighten a bit in the Summers -- I've since learned that there are shampoos that aren't quite dyes to enhance that normal process. I think Older Daughter's original hair may have originally been lighter than Younger Daughter's.

But I can't remember for sure.

A few years back, Older Daughter asked us if she could dye her hair. I said no... and was promptly overruled by my Long Suffering Spouse. "It's just this one time," my wife said. I am not saying there's any addicting substance in either this hair dye or any other. I'll wait for the scientists to prove it, as I'm sure they will someday. Then I won't get sued.

All their birthday money, their allowances, their earnings from babysitting or part-time jobs get plowed into new tubes and bottles and jars. Then there's related lotions and potions and the next thing you know, you can't get into or out of the shower in the morning.

Trust me on this. 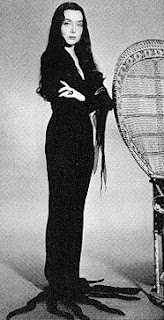 Younger Daughter recently dyed her hair black. Coal black. Midnight black. She thought she looked like Snow White. I told her she reminded me of someone else.

Fathers can be so cruel.

And the sarcasm didn't help: The hair is still very dark.

Both daughters assured us over Christmas that their hair is returning to the colors Nature intended. Since Long Suffering Spouse is also skeptical of this claim, I feel safe in saying I don't think this is so.

So my advice to the aggrieved mother in today's story: Wash the kid's hair as often as necesary to get the "ink" out. And don't let her do it again.

If it's not already too late. And for anyone looking in for whom this has not yet been an issue... when your daughters ask...

Posted by The Curmudgeon at 8:49 AM

Pricipals can be overstrict as well in other matters. They have to be careful.

I agree with the principal...school is for school. It is not a show place for the "Latest this or that". It is an arena for education. Now with that being said. Is not part of learning to learn how to become tolerant of one's differneces? Is that not part of education? Should we squash someones creativity because another person does not see it as being educational? What about art class, do we not promote creativity? Encourage individuality?

So the hair. Yeah I don't like the greens, the purples, the jet blacks. But that is me. I am not sure what your objection to colourings ones hair is? Is it that is is distracting to others? Is it the cost factor? What?

Being a mom of three daughters I have seen all kind of hair colours. No my girls did not do the rainbow thing. It has always been very tasteful and compliments their natural beauty. If they want to spend their hard earned cash on hair products then so be it. They are very aware that once you start colouring it is a life's process. OR not. I am goig grey...I don't like it...I can change that I can choose to dye my hair if I like....does it harm anyone? I don't think so. What about all those anchor men who dye there hair. Dan Rather has dyed his hair for years.

So I just think, school is for learning, if it becomes a distraction in class for the other students then by all means ask the student to change it. But if it is just because the principle opposes people colouring their hair then that is a totally different issue.

I am just chuckling to myself here...I just realized as I was typing my last comment that I had hair dye in my hair....

You always bring a different perspective on things.

That's a good one.

My 27 year old son was just wondering if his hair would look good purple. *sigh*

I wasn't allowed to do anything to my hair while still at home. now, I have no idea what my natural hair color would be..

His policy on "school romance" must have changed recently. Please visit http://www.cnn.com/2007/US/04/13/teacher.principal.sex.ap/index.html to see how he has spiced things up for Sandridge. In fact, he uses a teacher to demonstrate his change in philosophy.