A problem paying the bills... and not the one you're thinking of

Oh sure, I've complained about money problems here before. And I will again. But not today.

We receive a lot of mail at the Curmudgeon home. With two kids presently in college and another recently graduated, we receive credit card solicitations every single day for one or more of them. (You've been preapproved!)

Wouldn't you think that a kid smart enough to go to college would also be smart enough to see through the glamor of easy credit to the lifetime of debt servitude that lurks behind? The constant stream of credit card solicitations suggests otherwise.

Because we have kids in college, we also get loan solicitations from banks and other seemingly official-sounding institutions. (Important information about your child's college loan! But these aren't about existing loans at all; they're about how we should take out new ones.)

And Younger Daughter is a junior in high school. So she's receiving college information... a lot of it... every single day. Somewhere along the line, she failed to write her first name clearly on a form. So nearly all of these solicitations butcher her first name. The computers don't know that these random letters do not add up to anyone's actual name... although, in this day and age, maybe they do.

When I was a kid, I received an entire drawer full of college solicitations, mostly from schools in Illinois, Iowa or Wisconsin. Because I lived in Illinois. But Younger Daughter does also... and she's received solicitations from Washington State, Florida, Maine, and California and every point in between.

A week from tomorrow Youngest Son will take his entrance exam for the Catholic high school of his choice. He'll go where his brothers went... but the computers at all the other Catholic boys' and co-ed schools haven't yet given up hope. He's getting mail from all of them. 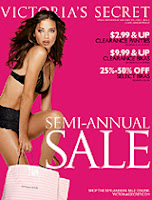 And then there's catalogs. Lots of catalogs. Baseball equipment. All the department stores. The occasional Victoria's Secret catalog.

I was mugging with a Victoria's Secret catalog one day, having (I thought) a little innocent fun with Long Suffering Spouse.

She put a quick stop to that: "You do realize that's addressed to your daughter?" she asked.

It was addressed to Older Daughter! I dropped the catalog immediately.

And then there's the junk mail related to our respective professions. Long Suffering Spouse is a teacher. There's a lot of continuing education solicitations and catalogs associated with that. And I receive all sorts of law related advertisements.

We subscribe to a number of magazines, too. I took over my parents' Smithsonian subscription when they passed; they used to give me their copies when they were through with them anyway. I'm starting to like that magazine better, most months, than National Geographic. But George Bailey and I joined the National Geographic Society at about the same age.

And then there's the Wilson Quarterly. There's something about everything in there. And the magazines I get from the Illinois State Historical Society. And American Heritage -- which used to be issued in hard cover, but now is just another magazine, albeit one that is usually a good read.

Did I mention Discover Magazine? We get that, too. My lips move when I read some of the articles, but I do try to be well informed on a variety of subjects.

And then there's Sports Illustrated. Youngest Son finally talked Long Suffering Spouse into getting him a subscription.

This will be interesting: Long Suffering Spouse would be none too pleased if I were to get the Swimsuit Edition... will Youngest Son get to keep his copy?

Every magazine sells your name to all sorts of other hopefuls, all of whom contribute to the junk mail pile. Which therefore grows and grows and... well, you get the drift.

And that's pretty much what the junk mail does in my house, accumulate in drifts. And somewhere in these drifts are the bills I'm supposed to pay.

And if I don't find 'em, I can't pay 'em -- and that's the problem I wanted to talk about with you this morning. Because it's happened to me recently.

But I'm afraid we're all out of time.

Hmmmmmm. I wonder if I can work from home on the day when the SI Swimsuit Edition comes out....
Posted by The Curmudgeon at 9:29 AM

So there I was, reading along this entry trying to see a World of Warcraft connection and getting a little frustrated with how unobvious it was...

So I closed the window and returned my attention to my Haloscan window...where I noticed that I had clicked on YOUR link--not the link you had suggested I visit.

Doesn't that just make me look like an idiot?

The Victoria Secret comment was priceless! Of course it'll make me sick to my stomach in about 10 more years.

We get a ton of stuff here too. Stuff we've never even heard of. It's crazy.

We get lots of stuff here too, but it is never for us. It is for the people that use to live here.

I'm out blog hopping. That is where you hop from one blog to the next until you reach 20. Check my blog in an hour for a plug to your blog and to see where my journey took me and to see how I got to your blog.

just goes to show that trees and recycling are way too underrated here in the US :)

Getting magazines is a surefire way to get junk mail. Besides that, people seem to know every facet of our lives and what we are doing. Perhaps Youngest Son doesn't know about trhe Swimsuit Edition? (some hope!)

Heather in Beautiful BC said...

Do you love Barb at Skittle's Place? Please check out my post then pass it on :)

That clutter pile looks strangely familiar. Are you sure you didn't take that shot at my house?

I'm beginning to think that being a lawyer comes with the requirement that your name be on every single law-related mailing list in the free world. I think it's amazing how many CLE advertisements I get. For one thing, I could never take all the courses sent to me or I'd never be able to actually practice law.

Secondly, only about 1/4 of those are ever interesting topics anyway and that's being generous. I have no desire to get 6.75 CLE credits in "Negotiating Nigerian Barge Contracts - a Webcast presented by Jeff Skilling straight from Waseca, Minnesota."

All that to say I feel your pain on receiving all the mail that is not fit to print.

Crum, Your blog made my day.

I stand at the trash can before I come in the door with the mail. Some days I have nothing left to bring in...

And those VS Catalogs... if the husband buys a gift for the wife... the catalog comes in his name... funny comments when children show up and look at the catalogues....

Bills? Isn't all that done on autowithdrawal from checking?

Off to face the world and later research bloghopping?

You are braver than me, I daren't add up all my expenses. I keep wondering if I should cancel this or that, but I am a creature of habit and would miss my 5 papers each day, and 3 on Sundays, I love to hold the real thing in my hand, even if I can only give them a cursory glance some days.
I will not give up my clarinet lessons or my cleaner either. At least one of my hobbies is cheap - that is walking, walking and walking. It costs nothing.