As of a few minutes ago, the big "Go Bears/praytostjude.org" sign is still up outside the Claretian Publications Building on West Monroe. I wasn't sure it would be.

A new visitor, "The Awkward Epiphany," left this comment: "Do you think the Saints have a monopoly on the spirits of all past saints?"

Well... no. It may have been a weak attempt at humor, but I'm not the only one having some fun with this. 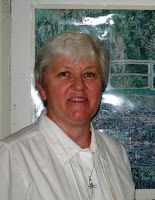 Sneed's column, in this morning's Chicago Sun-Times quotes our own "pigskin prognosticator extraordinaire," Sr. Jean Kenny (a Sister of Providence if you keep track of these sorts of things) as predicting:


Now, if Sr. Jean can make this little joke, so can I.

Twice now.
Posted by The Curmudgeon at 4:04 PM

Congratulations you are Bestest Blog of the Day!!!!

Please contact me at BobbyGriffin@gmail.com so I can fill you in on some additional details.

hey curmy, what do you think this will do for your site meter? huh? smiles, bee

Do you think the Saints have a monopoly on the spirits of all past saints?

Quick, get some more Sarge photos up ;-)

Congrats, keep up the good work

Congrats! Love the lines, But on Sunday its the Saints! Everyone needs some prayers these days. Even the BEARS. I am a new reader, but I will be back. Keep up the great work.

That is certainly wonderful news, Bestest Blog has a lovely ring about it. I'm sure Capt Picard will be pleased too.