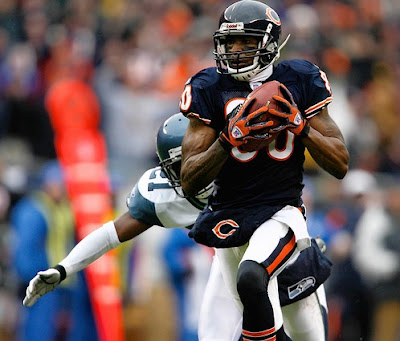 I'd try to explain the various machinations he went through, buying tickets from StubHub! and selling them on eBay through the good offices of a "power seller" of his acquaintance... and then obtaining four better seats and selling two of these... but during his explanation my head began to pound and I could no longer pay attention.

The bottom line: Yesterday was the first time Oldest Son made it to a Bears game.

It wasn't supposed to be that way.

In December 1997 the Bears were terrible, the weather was worse, and there was no hope of a playoff berth. One of my partners had season tickets... and no intentions of going to the last home game.

StubHub! hadn't been invented yet, and I don't believe eBay had either. Season ticket holders would try to peddle their extra tickets to friends and family... but, when all else failed, they'd give them away.

This was where my partner found himself in December 1997: He'd paid for the tickets. He wasn't going to use them. He'd tried and failed to sell them. He hated to see them go entirely to waste. So he asked if I would take them off his hands.

I took the tickets.

There is a tipping point in these transactions and my partner had crossed it: By the time he asked me, I was doing him a favor by taking these ducats free, gratis and for nothing. I wouldn't have taken them otherwise.

The great day arrived and Oldest Son, Middle Son and I set off for the game. The plan was to park by my office (I had access to a free parking space at that time) and then take the subway down toward Soldier Field. When we got to the office, we went inside, just for a minute, to let the kids use the necessary. I fussed around the office for a couple of minutes. There's always something to look at.

In 1997 I had a cell phone. But I didn't carry it all the time. I saw no point in carrying it to a football game in crumby weather where I wouldn't hear it anyway and I might lose it. So I didn't have it with me that day.

The flashing light on the office phone told me there were messages. I played them back.

One was from Long Suffering Spouse.

My mother had been in the hospital for cancer surgery. She was recuperating normally, we were told. But, I thought, trying, but unable to banish the thought away, perhaps something had happened. Long Suffering Spouse's message was that I should call home right away. She sounded upset.

I finished the messages and made ready to dial home.

Middle Son and Oldest Son had probably completed their business and were getting fidgety, ready to leave. Excited. But I told them that Mom had called and asked them to bear with me a moment. I placed the call.

"Your mother's had a heart attack," LSS told me, without preliminaries. "They don't know how long she has and you'd better get back here."

So we went back home. The boys didn't get to go to their game. I went to the hospital.

Middle Son has been to lots of Bears games over the past two years... as an usher. My late father was a great football fan. But, yesterday, when Oldest Son was so excited to go to his first Bears game, it was my mother I thought about.
Posted by The Curmudgeon at 10:04 AM

Touching post and my condolences on the loss of your mother. My mother passed away 4 years ago & there is not a day that goes by I don't think of her.