Answers to the Chicago Quiz

Thanks to the miracle of "Post Options" I'm putting these after (following? beneath?) the quiz I posted this morning. Even though it's really Friday afternoon. The answers that Shel provided are in blue. My comments are in red.

Bobs, Sliver Streak, Comet, Fireball (formerly the Blue Streak), and Flying Turns. (No, the Wild Mouse was not a real rollercoaster.) I didn't know any of these either.

(2) What was the former name of Martin Luther King Drive?

(3) How many times was Richard J. Daley elected mayor?

(4) Identify any two of the candidates who ran against Richard J. Daley for mayor.

Any two of these will suffice: Merriam, Sheehan, Adamowski, Waner, Friedman, Hoellen. But here's an exhaustive list from the Chicago Public Library.

A type of fish. The Chicago connection is that great numbers of these fish turned up dead on the shores of Lake Michigan, as this Time Magazine story from 1967 recounts.

(6) What did Jack Brickhouse yell when the Cubs hit a home run? 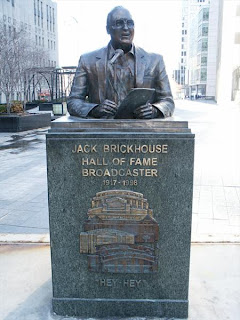 Hey Hey! If you look close, you can see it's even on his monument just off Michigan Avenue. Cub fans forget that, at one time, Brickhouse also broadcast White Sox games on WGN Television. And, of course, he did the Bears games on radio for many years. 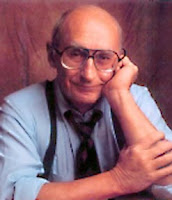 (7) Name, in order, the three papers Mike Royko wrote for.

The Daily News, the Sun-Times, and the Tribune. Royko called me a "yuppie" once when we were at the Billy Goat. But he took it back. Some time I'll tell that story. 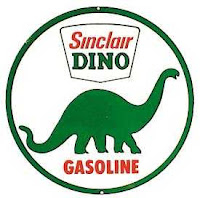 (8) What gasoline chain had Dino the Dinosaur as a mascot?

Sinclair. The Sinclair chain must still exist outside of Chicago, or at least it did a few years back. I was with Middle Son going to a baseball tournament in western Illinois and we bought gas at one. I carried the receipt with me until it disintegrated.

(9) Which of Bill Veeck's legs was the peg-leg? 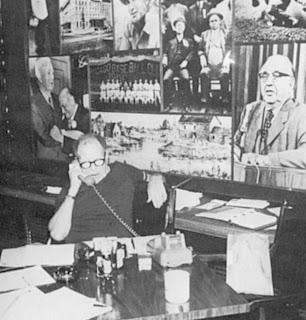 The right one. As I recall, it had an ashtray in it.

A famous Chicago area ghost. Here's a link to more information about her. At least one 1950's teenage tragedy song rips off this legend.

This was the original Playboy Mansion.

The host of a children's TV show. I knew this, although he was before my time.

(14) Name the announcer of TV bowling at Faetz-Niesen.

Whispering Joe Wilson. I recognize the name, but I didn't know this one at all.

(16) Where were the Stock Yards located?

Halsted, near 43rd. This is one I marked wrong on my score sheet because I was a couple blocks off.

(18) When he wasn't doing Riverview commercials, what was Two-Ton Baker's profession?

Band leader. I got this one wrong, too.

(19) What Catholic archbishop has a suburb named after him?

The town of Mundelein is named for George Cardinal Mundelein.

CET for Television. Are you singing along with me? I didn't go to amusement parks but I watched a lot of TV as a kid.

Ogden, Adams, or Jackson. I'm embarrassed to say I missed this one.

(22) Name the sponsor of TV wrestling who was killed by an unhappy customer.

Sid Forhman. I'm not embarrassed to have missed this one.

(23) What was the last home stadium of the Chicago Cardinals?

(Updated 2/2/09) This is a trick question. Although Chicagoans of a certain age remember the Cardinals playing at Comiskey Park, an article in the Sports section of the January 25, 2009 Chicago Tribune confirmed that, in their very last season in Chicago, the Cards played four games at Soldier Field. They also played two games that year in Minnesota.

(24) Name one locally-brewed Chicago beer. (Recent brew-pubs do not count!)

Old Chicago, Meister Brau, Tavern Pale, Drewrys, Edelweiss, etc. I had a brain cramp on this and couldn't remember any of these.

(25) Before Circle, where was the Chicago campus of the University of Illinois?

(26) Where did the Beatles perform on their first trip to Chicago?

National. I remember the Green Stamp books. My mother collected.

(28) Name the boxing champ who gave his name to a local milk company.

Joe Louis. Another one I got wrong.

(29) Where was the Army Induction Center located?

Van Buren and Des Plaines Streets. Didn't know this one either. 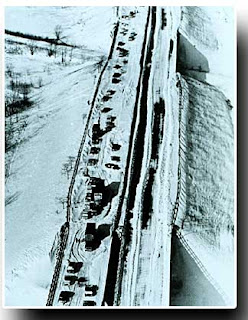 27. That's the number I remembered too, but I've also seen 23.1 bandied about. We're celebrating the 40th anniversary of the 1967 blizzard this weekend. If "celebrating" is an appropriate word. I was just a kid and remember it fondly -- but I doubt I'd have the same attitude today.

(31) Who wore an Uncle Sam suit, and was always a losing candidate for public office?

Lar "America First" Daly. Regular visitors should have gotten this one right.

(32) What public building was often called simply "Eleventh and State?"

Comiskey Park. You know, I'm wondering if whoever came up with this quiz was from the South Side -- with the Riverview questions just there to throw people off the trail. Andy's cry: "Gooooooooooooooooooooooooooo White Sox!" 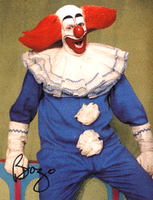 (34) Name the TV show that was the source of the local catch-phrase: "Right Here, Harv."

Bozo's Circus. I watched this show for years. I just don't remember this as a catch-phrase that people used. 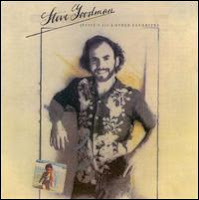 (35) Who were the Lincoln Park Pirates?

Lincoln Towing. They were the subject of the Steve Goodman song, "Lincoln Park Pirates" which, I believe, was popular in places besides Chicago as well. Are you singing along with me yet?

The streetlamps are on in Chicago tonight/ And lovers are gazin' at stars/ The stores are all closin' and Daley is dozin' and the fat man is counting the cars/ And there's more cars than places to put 'em, he says/ But I got room for 'em all....

Not singing along? Maybe it's my voice. I hope Simon doesn't hear me.

And, yes, I know that's not the right album cover. But it was the best picture I could scrounge.

North Avenue near First Avenue. Another one on which I had no clue either.

Window To The World.

Madison Street, from Clinton to Halsted. I'd say this is too narrow a location, although certainly accurate.

How did you do?
Posted by The Curmudgeon at 9:02 AM

I don't have a clue on #23; I got all of ONE question right. I got that quiz from Chris's uncle, a Chicagoan who now lives in Miami. (Can we say SuperBowl tickets cheap?) I might also mention he's in his '80's and sharp as a tack. Anyway, if someone can come up with a different answer to #23, let me know, I'll take GREAT pleasure in passing it on to the "expert Chicagoan".

Curmudgeon:
#1 I beg to differ - the Wild Mouse was considered a Roller Coaster by Riverview Park.
#7 I also met Royko at the "Billy Goat" -he called me a "Pompous Ass", Mike never minced his words!
#18 Two-Ton Baker (the music maker) had a children's show on television in the late 1950's.
#23 I also dispute this one -Comiskey Park was their home field.
#24 I had forgotten about Meister Brau, my uncle's favorite beer.
#27 Read my Profile.
#29 It was called AFEES (Armed Forces Examination and Entrance Station). It was my last stop before being sworn into the Army.
#39 Part of Skip Row was also on Jackson Blvd.
#40 Otto Kerner was my Father's cousin and Mayor Anton Cermak's son in law.

Shel, thanks again for the quiz; I had fun getting the pictures even if I didn't have so much fun not knowing several answers....

Thanks, Beach Bum, for the confirmation on the Cardinals.

CMHL -- pretty good for just an occasional visitor over the years....

There's more to the "Right here Harv" story than it being a catch phrase. The story I remember from my high school days (graduated Mendel Catholic in 1969) was that, on live TV, Bozo was talking a 9 year old kid who went rogue on him, and managed to get a "Right here Harv!" on air as he pointed to his pecker before the technical guys could cut it off. Not sure if that's apocryphal or not.

In 1967 my health teacher came into the class room laughing his head off. It seems during lunch the teachers at Bremen HS would watch Bozo Circus. It just happened that this kid just won the grand prize game and master Ed ask him to say something to someone at home, his brother. With the middle finger up right in front of the camera he says, Right Here Harv. And the new catch phrase was on. That's the way it happened.