Speaking of orange and blue...

The Bears have their first playoff game on Sunday and many of us here in Chicago have passed right through worry and are close to panic. 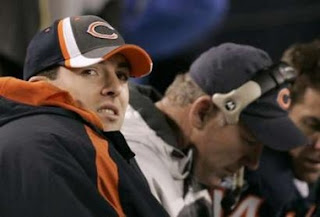 Which Rex Grossman will show up? The one whose overall stats made a case for him to go to the Pro Bowl? Or the one who had a 1.3 QB rating against Arizona -- and, worse, a 0.0 rating against Green Bay on New Year's Eve?

Not everyone is panicking of course. Not Oldest Son. He's cruising eBay looking for tickets to the game. He'll pay as much as $150 or $200 from money he's not yet earned for the privilege.

I told him he doesn't need to spend that kind of money to get the whole stadium experience. For only $100, I told him, we'll open the windows so he can freeze. When he has to go to the bathroom I'll jump up and stand in front of him for 20 minutes. And just to show my generous side, I'll charge him only $4 for a can of beer instead of the $6 or more he'd pay at Soldier Field. (It is Soldier Field, by the way, not Soldier's. Or Soldiers'. Just another way we can tell who's really from here....)

So far Oldest Son has turned me down.

There will be all sorts of civic tributes to the Bears as we draw closer to Sunday's game. But I don't think any will equal the banner I saw this morning on Monroe Street at the Claretian Publications building.

I wish I had a camera; you'll have to settle for descriptive words. The banner -- orange and blue, of course -- was huge, as were the words "Go Bears."

But it was the next line that caught my eye:

The Claretian order operates the National Shrine of St. Jude, so the tie-in is natural.

But the banner that the good fathers have put up may not convey the right sense of, um, confidence?

St. Jude, you see, is the patron saint of desperate causes.

Posted by The Curmudgeon at 4:39 PM

Go Pats here. I didn't know Just Write had disappeared - too bad.
I loved Soap too.

I am not a football fan and I don't even have any idea as to who this team is you are talking about. But by the sounds of things, it's a big deal. I have never understood the attraction to watching some silly and might I add some overweight men wearing tights running around a field in the middle of winter trying to catch a ball and run it up and down a field. I understand they get paid a pretty ransom for doing this as well. Dang I am in the wrong line of work.

Hope you folks enjoy the game.

American Football was really big in the UK for a few years in the mid eighties, & I have some good memories of staying up to 3am watching the Superbowl with my Dad. The Bears were 'my' team then, the days of William Perry & Mike Ditka, and the cold, cold Soldier Field. I'm glad you haven't knocked that down for some soulless 'giganta dome'.

Haven't watched it for years, but can't believe the amount of teams that have switched cities (any UK football teams doing that would lose 90% of their fans-ask the 'MK Dons') nor the amount of roman numerals after the Superbowl. I remember Superbowl XX! I need widescreen to fit them in now :-(