No joke: Germans only following orders when they veer off the highways

Some people find ethnic humor very offensive. Perhaps you have been scolded for resorting to this sort of humor in the past. I have been scolded on occasion myself. And I have learned: Just because someone is German, for example, does not mean he will blindly follow orders.

So I will present this news story, posted on Yahoo! News without comment: 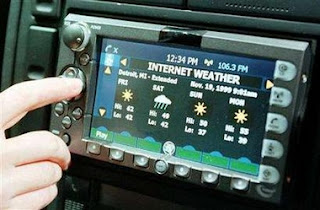 BERLIN (Reuters) - A 46-year-old German motorist driving along a busy road suddenly veered to the left and ended up stuck on a railway track -- because his satellite navigation system told him to, police said on Sunday.

The motorist was heading into the north German city of Bremen "when the friendly voice from his satnav told him to turn left," a spokesman said.

"He did what he was ordered to do and turned his Audi left up over the curb and onto the track of a local streetcar line. He tried to back up off the track but got completely stuck."

The police spokesman said about a dozen trams were held up until a tow lorry arrived to clear the car off the track.

Several German motorists have crashed their cars in recent months, later telling police they were only obeying orders from their satnavs.

Must remain politically correct.... still trying not to comment....
Posted by The Curmudgeon at 2:49 PM

OMG! This is sooo funny.

Since I'm of German stock I feel I am allowed to say that this explains a lot about the holocaust.

This kind of reminds me of the movie RV.

I think my blogger buddy from Yada Yada Yada posted a story like this a long time ago. Except she was drunk and there was no GPS involved.

I have a sat nav and it has taken me on a wrong route too. Hopefully, I wouldn't be that stupid.