They've got to be to killing themselves at Fox

Trying to figure what to do for an encore, that is.

Last night's Fiesta Bowl on Fox was a stunner. A shocker. A made for TV movie: Cinderella Kicks Butt.

And after dominating the game over highly-favored No. 7 Oklahoma, the wheels seemed to come off the cart for Boise State, a "mid-major" from the unheralded Western Athletic Conference: Oklahoma came storming back late in the game with 18 unanswered points to tie. And that those 17th & 18th points did not come easily: Thanks to penalties, the Sooners got three chances to make the necessary two point conversion, but they finally, dramatically did so.

The Sooners didn't just have momentum back on their side. They had a tsunami. And then, in what seemed to be the last gasp, Boise QB Jared Zabransky gave up an interception. A pick six. The ball seemed over. Cinderella was shoeless -- and the coach had turned back into a pumpkin as orange as the Broncos' uniform pants.

And then Boise State, now looking to tie, scored on a crazy, 4th and 18 razzle-dazzle lateral play... and we went to overtime.

College overtime rules are so much better than the NFL: Each team gets a chance to score. If both score, a second OT is staged. If a third OT is necessary, a team scoring a touchdown must attempt a two-point conversion. Oklahoma had the ball first.

Adrian Peterson needed one play to get the Sooners their OT TD. One play. Men against boys. Goliath had shaken off David's pebble attack and gotten back on his feet.

And then it was Boise State's turn. They struggled. They did it piecemeal. But they finally scored... on fourth down again... on another 'go out to the manhole cover and turn toward the Buick' play.

And then they went for the two point conversion. 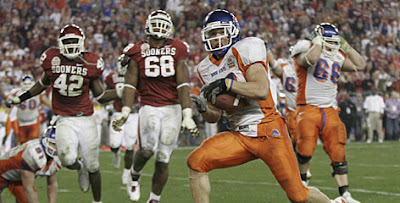 They're calling it a Statue of Liberty play. I think Oldest Son would dispute that, but Quarterback Zabransky mimed the throw with his right hand and Ian Johnson plucked the pigskin from Zabransky's left hand and ran to the corner of the endzone before several of the players knew he had the ball. I'm sure I wasn't the only viewer who needed the replay to figure out what I'd just seen.

And the drama still wasn't over.

Ian Johnson gave a very composed post-game interview, with his adoring cheerleader girlfriend at his side and the usual chuckleheads crowding in the background making hand gestures of questionable decency. I was thinking what an unusually well-spoken young man he was... when he got down on one knee and proposed marriage to the aforementioned cheerleader girlfriend, Chrissy Popadics. 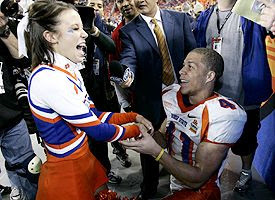 It took Ms. Popadics a couple of seconds to figure out what was happening... but she did... and she said yes. 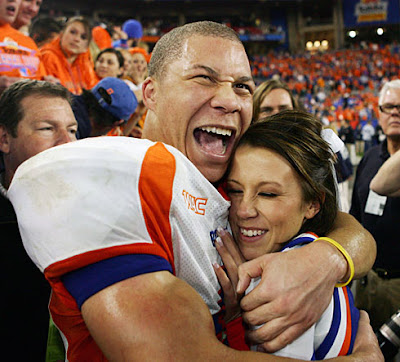 "I'm sure it probably wouldn't have been as romantic if we would have lost," Zabransky said. You think?

So pity Fox Sports: How are they ever going to top this? And they've still got three more games to go....
Posted by The Curmudgeon at 2:00 PM

Email ThisBlogThis!Share to TwitterShare to FacebookShare to Pinterest
Labels: News and Views, The Sporting Life, TV

What's in the water up there in the northwest? Didn't Oregon State win on a 2 point conversion as well last week? I'm not sure if that game was on Fox as well. I hope I'm wrong, but I'm thinking that the next three games are not going to be as thrilling...

Darn it.. I missed the game and the proposal!!!

I didn't understand half of that, but it was a great post, I enjoyed it.