The Curmudgeon goes to the grocery store 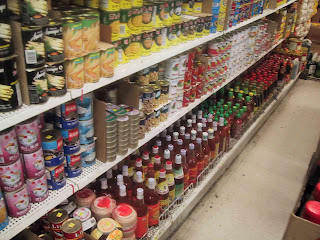 One evening, before we were married, my soon-to-be wife and her roommate decided to have a normal, sit-down, grownup dinner.

That in itself will tell you how long ago this was: In this long ago time before the Internet, there was a widely-held belief that grownups ate meals while seated at a table, without blogging or even the TV to provide distraction.

We were young; what did we know?

Anyway, I was already working for a living and the party was delayed until I could arrive. When I did, I and the roommate's boyfriend (now her husband) were dispatched to the nearby grocery, there to pick up a couple of last minute provisions for the meal.

It was a simple task, really, and even a simple person such as myself should have been capable of discharging it.

But I was hungry. I was lured to the girls' apartment on the false pretense that I was going to receive a meal -- and upon arriving was instead dispatched on an errand. My subconscious took over.

I got the couple of items that I was instructed to get -- and every variety of snack cracker and dessert that the Certified grocery chain had to offer.

And even though I paid for these excesses, the young woman who was to become Long Suffering Spouse was mortified. She made a mental note: I was not to be trusted in the grocery store. 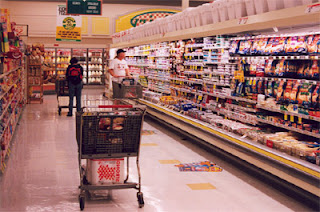 That's not to say that, in the intervening 25 years, I have not been sent out to get this or that as exigent circumstances required. I certainly have. When the late night pharmacy runs were made, it was usually I who made them. But when we needed a gallon of milk on a Sunday morning I have all too often returned home with donuts or a coffee cake besides. The lesson learned a quarter century ago has been regularly reinforced: I am not to be allowed to do the grocery shopping.

I have not minded this arrangement.

But this weekend may have changed things.

We have just begun Catholic Schools Week. Parents always grumble that the run-up to Catholic Schools Week always includes a number of big, involved projects for the kids -- projects into which the kids' parents are all too often drawn. But every teacher wants a gaudy display to impress the young parents, the new parents, who are deciding whether to invest a healthy portion of their futures in Catholic education. And there's lately been some sort of unifying theme and the whole school is decorated....

Long Suffering Spouse cut out wall decorations all week long -- while we both encouraged Youngest Son to complete his various gaudy projects -- and then she had to hang everything up in her room and the adjacent hallway. And she still had to design and give a re-take on a test. I was with her for three hours Saturday trying to figure out how to set up a slideshow on her Apple computer that would play on the TV in the room while the parents came by and ooohed and aaaahed.

I'm sure that there are Apple users among you. But most of the people in any business I know of are locked into Wintel machines. We know we are unwitting drones of an Evil Empire, but, like the clever slaves in classical comedies, we have devised strategies for making the best of our lot. The Apple machines are similar enough to tease us into believing that we can readily apply our hard-won Wintel experience to any problem at hand -- but different enough to dash these hopes, often cruelly. And if the teachers' machines had any documentation, Long Suffering Spouse hasn't seen it. And the Apple machines are "intuitive."

Intuitive means there's nothing in writing. The time I spent learning how to read was entirely wasted, at least for this purpose.

But I figured out how to import the photos LSS wanted and get the slideshow to run and, I will happily testify, the "Ken Burns effect" that the Apple machine used in running the slideshow was very cool.

But now Saturday was gone and Sunday was the Open House that signals the beginning of Catholic School Week. And it was also necessary that someone get the week's groceries.

"I'll do it after the Open House," Long Suffering Spouse told me.

I knew this was reverse psychology -- knew it, and fell for it anyway.

She put up a show of reluctance -- although, given my checkered history of grocery shopping lo these many years, maybe it wasn't entirely a show. "Really," she said, "I'll take care of it. We don't need that much this week."

It occurred to me -- in the logical part of my brain -- that LSS has asked me to accompany her to the grocery a couple of times in recent weeks and I've gone with to assist and speed the completion of the task. Maybe she was trying to audition me for a new solo effort. But I pushed these thoughts aside and insisted that I should go. "Especially if there's not much to get, why should you have to make the extra trip?"

Sunday morning, after Mass, Long Suffering Spouse dictated the grocery list to me. It was short. Younger Daughter had already gone to her job; Youngest Son was supposed to be a 'tour guide' at the Open House. I would take LSS and Youngest Son to school, drop them off, and proceed to the grocery.

And it was almost time to go -- and I poured an extra bowl of cereal for myself.

Youngest Son was confused. "I thought we had to leave."

"We do," said Long Suffering Spouse, but not harshly. "Your father just doesn't want to go to the grocery store while he's hungry."

So it was a good news/ bad news outcome: The good news was I didn't return with a lot of unnecessary things. I even got the right brands of most of the things I was sent to get. But the bad news is... I'm afraid she may ask me to do this again.
Posted by The Curmudgeon at 8:46 AM

you see, at one point in our early months of marriage (when my husband would graciously offer to do the grocery shopping because there i was living in the bathroom throwing my guts out due to all day morning sickness),and he comes home with all those weird looking things that are definitely not on the list...i would think he was doing it on purpose, so he won't have to do it again...

but then, a few times of the same frustrating and almost funny incidents made me realize that in general, men are not just programmed to do the grocery shoping. but who knows, you maybe one of those few exceptions:)

by the way, the very first picture is from an asian store...i see my favorite brand of sardines there:)

May, no! I agree with the programming theory.

A couple weeks ago -- on a pharmacy run -- I wanted to pick up some razor blades. I went up and down all the aisles. I found blades of all shapes and sizes, for men, women and poodles -- but not the ones I was looking for.

Finally, I asked for help.

The woman regards me with disdain, walks me back to the display at which I'd been looking for 15 minutes at least -- bends down to the floor -- and pulls the brand I was looking for from the back of the bottom shelf.

It's got to be programming!

You are a good husband for helping out at school and at home. I don't think your LSS really suffers too much with a guy like you around the house.

Did the storeowner mind you taking those pictures?

so curmy what did you buy? and tell claire i tried and tried to get you to put up a photo, give her the one of alfred e newman and that'll have to do! smiles, bee

Crum, You had that skill in you all this time - it was just hiding and waiting for the perfect time to bloom. Congratulations on your growth! :O)

Ha!Ha! My Dad is barred from going to the grocery store as well. Even when my mother broke her leg! She told him take out food only. It is just the two of them now and she has allowed him a trip to the store in the last 10 yrs which resulted in way too much food. They didn't even have enough cabinet space to store it. His story is always the same "but it was on sale." Ha, ha, ha. My poor Dad. At least you are not the only one :-)

Smart move eating before heading to the store. I have fallen victim to the grocery store hunger cravings as well and my wallet paid for it dearly. :)

I can send hubby to the store for milk and eggs. He'll bring those home along with things from every other department in the Super-Store.