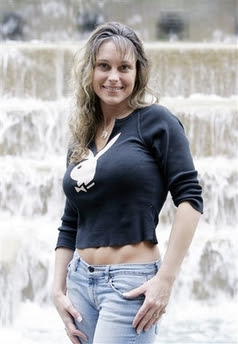 This is Staff Sgt. Michelle Manhart, USAF. According to an AP story posted today on Yahoo! News, Sgt. Manhart appears in this month's issue of Playboy magazine. According to the AP, Sgt. Manhart is in uniform in one photo, "yelling and holding weapons under the headline 'Tough Love.' The following pages show her partially clothed, wearing her dog tags while working out, as well as completely nude."

The Air Force is not amused. The AP reports that Sgt. Manhart has been "relieved of her duties while the military investigates." That presumably will involve looking at the pictures. Over and over again. Asking for the outtakes. Looking at them, too. Investigative work can be so tedious.

I can understand why the Air Force is not too happy about Sgt. Manhart's decision to pose. They've had their troubles with sexual harassment cases -- even a rape scandal -- involving the Air Force Academy in recent years. So I can understand when Oscar Balladares, Lackland Air Force Base spokesman, says "This staff sergeant's alleged action does not meet the high standards we expect of our airmen, nor does it comply with the Air Force's core values of integrity, service before self, and excellence in all we do." Although he's pre-judging the outcome of the investigation a bit isn't he? I mean, maybe the pictures do display excellence.

I understand that posing in this fashion may not be conducive to good order and discipline in the ranks. Heck, I've haven't seen the pictures and my own discipline is no longer in good order. And if there hasn't been an express ban on this sort of thing in the past, it may be a good idea to adopt a rule now.

What I'm thinking about is this: Aren't recruitments down these days? Isn't this a heck of a recruiting poster? And a slogan: "Join the Air Force! We got sergants that look like this!"
Posted by The Curmudgeon at 5:15 PM

I could take orders from a Sergeant like that....

crumy? are you posting this to get more hits honey? sigh.... she is a looker though, i give you that! bee

You're right; I'll join if you tell me which section she is in!

She makes me feel "at ease."

I agree with you. Wouldn't these pics help recruitment numbers? Duh!?