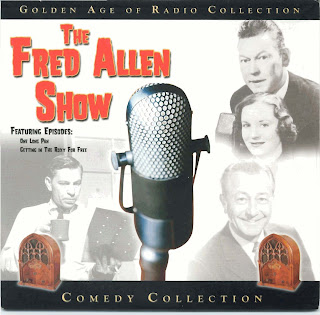 I found this at Walgreens Tuesday night and since it cost only a dollar I bought it. Two Fred Allen programs from the 1948 season, toward the end of his radio career.

I had a dentist's appointment yesterday, so I drove to work. That way, I could also listen to the programs. Long Suffering Spouse is a tolerant woman -- she puts up with many of my eccentricities -- but she can't stand to be in the same house with me when I listen to old time radio programs.

Fred Allen died in 1956 at the age of 61; he didn't have the celebrated old age that George Burns or Jack Benny did. Allen's reputation also suffered because his programs don't age well. The ones I listened to yesterday, for example, were chock full of topical references -- I caught most of them -- but not all. And my children would be unlikely to catch any. So many Jack Benny sketches, on the other hand, are timeless -- funny then, funny now -- because they dealt with recognizable people in situations, not current events. (In fairness, I should add that my children do not necessarily agree with my assessment that Jack Benny is still funny. That's because they're stubborn. And they're siding with their mother.) 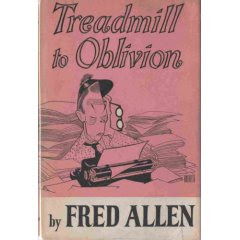 The Jack Benny - Fred Allen feud is still funny today, 70 years after it started. Some of the scripts are in Allen's book, Treadmill to Oblivion, which I read as a kid. Somewhere along the line my parents disposed of it. I'd love to have it today.

And Allen's parody of game shows, when guest star Jack Benny is named "King for a Day" remains fall down, pound on the floor funny.

Listening to the Fred Allen programs yesterday reminded me that Allen still has an heir enjoying national fame. 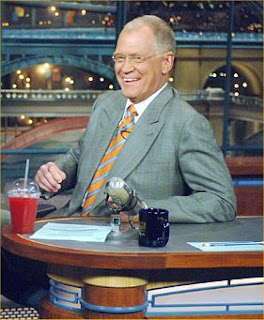 David Letterman's feuds with his various networks are right out of the Fred Allen playbook.

And Letterman often comes across as an unhappy man, no matter how successful he has become, or how famous. In the judgment of his contemporaries, Allen also seemed happiest when he was miserable.

Letterman has always acknowledged his debt to Johnny Carson -- who made a career out of doing Jack Benny's doubletake. And Carson and Letterman both have acknowledged their debt to Benny. Benny, in turn, said he borrowed extensively from Frank Fay.

Letterman would probably acknowledge his debt to Fred Allen too, but most people wouldn't know who he was talking about.

But we all come from somewhere.
Posted by The Curmudgeon at 8:59 AM

Email ThisBlogThis!Share to TwitterShare to FacebookShare to Pinterest
Labels: Personal, Things you never knew -- and never wanted to know either, TV

I like some of the oldtime stuff, too. But I guess no one else does, as it was on sale for a buck!

Benny Hill is another show that my wife does not let me watch!

well i am a leno girl, i think letterman sucks, but then who wants my opinion anyhow? smiles, bee

It's been my observation that there's really no such thing as "timeless"; each generation has its own take on what the word even means. Unfortunately, one person's "Golden Age" is another's old news, and this is coming from a 35-year-old who still thinks the sight of Sammy Davis Jr jumping into the arms of Dino at a show at the Sands and acting like a ventriloquist's dummy is one of the most hysterical things on film-

Sorry, Bee. I'm a Letterman girl all the way. I hope we can agree to disagree!

Someday, when I'm famous (ha ha) I will fly to New York to be on Dave's show even though I'm FROM the LA area.

I love old radio shows! I usually find a few while driving long distance in the evening with my children. They enjoy it just as much as Mommy does :-)