Usually when they predict a big storm, it fails to materialize 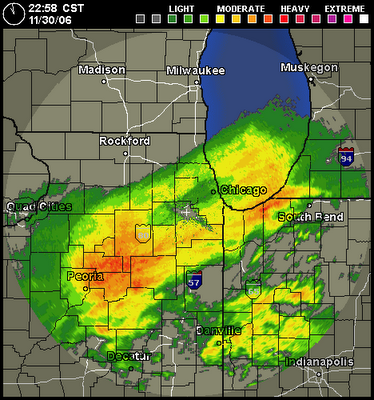 A look at the radar last night, however suggested that -- this time -- maybe they'd be right. The sleet pelting against the windows provided still another clue.

Younger Daughter had already been awarded the Snow Day she'd dreamed of: She called me late yesterday afternoon to announce the happy news.

Happy for her, anyway.

I thought her school was crazy. What will they do, I wondered, in January, when really bad weather actually happens?

But if the local radar and the sleet outside suggested that something was happening, a look at the midwest radar confirmed that it might continue happening for awhile: 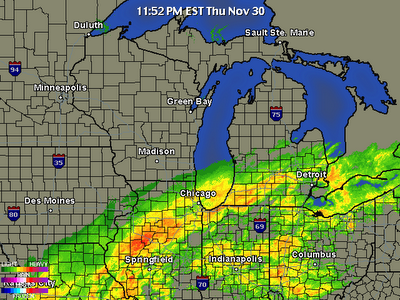 There was thunder and lightning this morning as the sleet turned to purely snow. (Pure as the driven snow?) Well it was windblown snow, that much was certain. I captured this radar image before I went out to help Long Suffering Spouse find the car.... 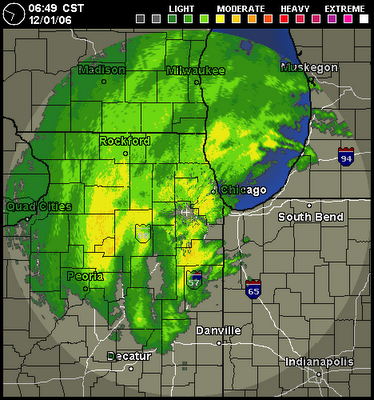 The current image suggests that the storm is moving north of the Chicago area now, sooner, perhaps, than expected. Or maybe it's just intermission. But most of the schools are closed in the area. Younger Daughter's school was just the first to announce: Long Suffering Spouse and Youngest Son have been given the day off as well.

But I'm here in the office!

I came up out of the Pedway beneath the Daley Center, up the escalator into the County Building, listening to little snippets of others' conversations as I went. There is a common theme this morning: We all accomplished something by getting here.

Can we go home now?
Posted by The Curmudgeon at 8:34 AM

Thanks for adding me to your blogroll, I shall now reciprocate.

The weather certainly has been doing strange things here too, it is very mild and people are still going out wearing tee-shirts, which is very unseasonal for December.

I didn't realise you was Curmudgeon, silly me, you are down twice now I think. I always appreciate your very knowledgeable comments.

I saw the news this morning. Yeesh! That looks crazy out there. And, it's coming this way. Very windy here today. Batten down the hatch! The storm is coming!

Yikes! Those pictures look scary; they're not coming over England, are they?

Cool weather maps! but where's my joke you promised??

Well, when I went to go pick up Chris last night, it wasn't doing a darn thing here. About an hour later, though, it starts snowing. Evidently, it continued to do so all night long, since I woke up to a front door that was drifted shut. After I accomplished getting out of the house, I helped Chris shovel the driveway so we could get the truck out of the garage. That was the easy part - then I actually had to DRIVE it! Actually, though, this year that's a lot easier than it was last year, this truck handles a heck of a lot better than the old one did. No snow days here for either of us, though; he went to work, I am going to work, plus that, I got most of the Friday errands ran. Accomplishment? yes. Proud of myself? Not yet. I think I'll wait til May when I'm sure it's done snowing for that last one. Then I can say I made it through another winter up here without having a wreck (cross your fingers) or freezing to death.

My husband was in Chicago this week (for RSNA) and got out just in time in Wednesday morning. His friend and colleague was not so lucky. I think he is still stranded in Chicago.

It's days like that remind me why I left the Midwest.

We got wind and colder here south of Detroit. No snow yet. I am NOT sad about that.

I've had many days (most every day) of getting to work and believing it was enough that I had arrived. Showing up is alot of life. --- because it's not easy showing up.

We've had oddly spring-like weather here in New England, but looks like we may get whalloped tomorrow. Hope you're dug out by now!