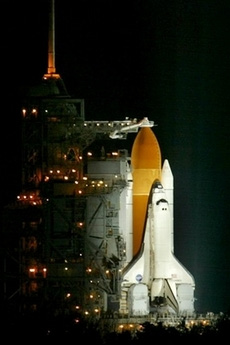 The launch of Shuttle Discovery, originally scheduled for last night, has been postponed until the weekend.

When STS-116 does lift off, however, it will be carrying a native-born Chicagoan, Joan Higginbotham. That's Ms. Higginbotham, below. 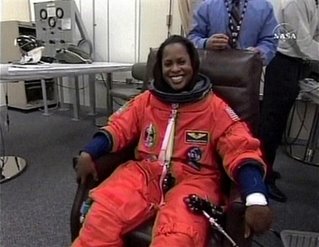 Ms. Higginbotham is a 1982 graduate of Whitney M. Young Magnet School here in Chicago. I, for one, am thrilled to have my city represented in outer space.

After all, our political system and most of our politicians in Chicago and the County of Cook seem to be completely out of this world -- but, seriously, I am happy to see a fellow Chicagoan take this trip into outer space... even if the mission is only to rewire the International Space Station.

You're no doubt sick of the phrase "you go, girl"... well, Ms. Higginbotham really will. 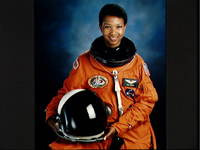 But Ms. Higginbotham is not the first astronaut with strong Chicago ties. At left is Mae Jemison, the first African American woman to venture into space (in 1992, aboard Shuttle Endeavour).

Dr. Jemison (she's a medical doctor too) was born in Alabama... but she moved to Chicago at the age of three and graduated, in 1973, from Morgan Park High School, on the South Side (at age 16!). So we can claim her, too.

And, as an aside, Dr. Jemison not only was an astronaut, she played one on TV, too. Here is a picture of Dr. Jemison as "Lt. Palmer" on the one and only episode of Start Trek: The Next Generation in which she appeared ("Second Chances").

Some may think a foray into sci-fi TV might trivialilze or diminish her own very real accomplishment, but Dr. Jemison said in a 2005 CNN interview, that she found inspiration for her life's work in the original Star Trek series: "What was really great about 'Star Trek' when I was growing up as a little girl is not only did they have Lt. Uhura played by Nichelle Nichols as a technical officer -- she was African.... So that helped to fuel my whole idea that I could be involved in space exploration as well as in the sciences."

Besides, it didn't hurt Stephen Hawking's career any. 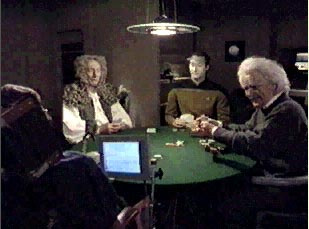 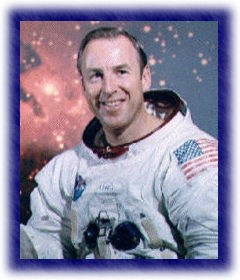 And I can think of yet one more astronaut with connections to the Chicago area: Captain James Lovell, USN Ret., of the Apollo VIII and Apollo XIII moon missions, runs a restaurant in north suburban Lake Forest with his son, James A. Lovell III.

I saw Captain Lovell at a Welcome Home ceremony for Navy reservists a couple of years ago up at Great Lakes. He was one of the speakers and, he quickly noted, far from the most important... because two of the other speakers were winners of the Congressional Medal of Honor.

But that's a story for a different day. Today, let's wish Joan Higginbotham and her Discovery colleagues Godspeed, shall we?
Posted by The Curmudgeon at 9:29 AM

Awesome!! I do want to hear about your encounter with James Lovell who kinda sorta has a Hollywood connection as well. Tom Hanks rings a bell.

Awesome!! I do want to hear about your encounter with James Lovell who kinda sorta has a Hollywood connection as well. Tom Hanks rings a bell.

This is totally off the subject. I just read about the shootings in the Loop. The victims were lawyers. Yes, I’m an alarmist. Please e-mail me and let know that you’re OK.

Same here. Where are you C.?

I can vouch for Lt Palmer. She is a good officer.

Great post! My dad's career has been with NASA since I was 5.. and I'm a space fan.

Congratulations to Ms Higginbotham and hooray for your own personal jingoism. It is great to hear someone with genuine affection for their "little patch" and the courage and grace to say it and share it. Thanks.

What amazingly brave women. I'm afraid we can't compete with you when it comes to space travel, though Michael Foale came from Cambridge, and we Stephen Hawking here too.

Did she take off today??

now curmy, don't get mad when you read my blog for sunday, you hear? just brace yourself. or better still, skip it and let your blood pressure stay level. it probably is monday morning when you are reading this, so take a deep breath and forget you ever knew me, okay? sigh.....

OMG. My momma graduated Morgan Park High School, and my dear departed uncle, my momma's only brother, was a Morgan Park Military Academy grad. Both of them are from another planet, too.