Christmas baking -- or -- Not that kind of support! 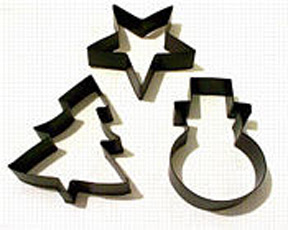 Long Suffering Spouse bakes at Christmas. In truth, whatever small status I may have in my community is based upon this. (That Curmudgeon is a self-important, pompous prig, but his wife bakes good cookies, so let's slate him for the parents' club. Maybe his wife will bake cookies for us!) 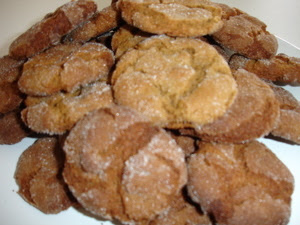 To say that my wife makes cookies is like saying that the Red Cross helps out a bit. Compared to my wife's cookies, store bought cookies are little more than compressed sawdust and sweepings.

My wife didn't make these gingersnaps. But her gingersnaps are among my favorites. Along with the oatmeal raisin, and the coconut squares, and the brownies, the hard gingerbread, the soft gingerbread and, when all these are depleted, the sprinkle cookies of various shapes.

Others like the raisin date bars or the wreaths or the Russian tea cakes, although I'll generally leave these alone. And there's others, but I never actually learned their proper names.

And she makes breads, too.

One of our old pastors used to wait by the window of the Rectory when he thought LSS might be delivering Christmas baking -- so he could intercept -- and keep -- all the breads for himself. The office staff knew what he was doing. He hardly ever came out of his office otherwise.

Since LSS has gone back to teaching full time, however, the baking window has shrunk dramatically. This year, the window opened this weekend.

That meant that a bit of planning had to go into the operation -- the giant sacks of flour and sugar had to be laid in and a lot of other things needed to get done first.

But this was also the weekend when the college kids came home. So we had four teenagers in the house. (Well, three teenagers and one post-teen.) 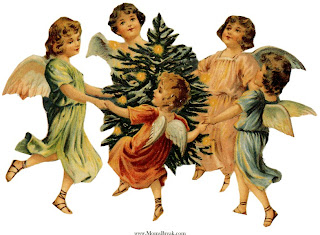 These aren't any of them.

The teenagers believe that they are helping so long as they don't actively impede operations. But Younger Daughter had six baskets of clothes, clean, dirty and probably in-between, in her room -- leaving none to be had anywhere in the house -- and Oldest Son and Middle Son brought home mountains of laundry each -- and expected Long Suffering Spouse to referee who whould have priority use of the laundry facilities.

And they do expect their meals, don't they?

And if they put their dishes in the sink... never the dishwasher, sometimes the sink... well, that's something isn't it?

I blew up a little Sunday morning. Youngest Son was present to catch the flak. I was trying to explain to him... my voice rising the whole while... but never loud enough to disturb the slumber of the sleeping collegians on the second floor... how Mom has limited time to get this done, and how we all have to pull together and provide support for her if she is to have any hope of finishing in time for Christmas. Long Suffering Spouse was in the room with me... probably wondering whether she'd need to go looking for the tranquilizer darts.

Youngest Son didn't bat an eye. I finished my little speech about the necessity to provide support for his mother and he immediately responded, "You're doing a heck of a job, Mom, I'm behind you 100%."
Posted by The Curmudgeon at 8:49 AM

kids these days...they are just so witty :)

and if your wife does not read your blog...go print this post, and give it to her the day after christmas. she may not weep in front of you right away, but believe me, her heart will be so warmed, it will literally swell. with gladness.

Dare I say I make a mean Christmas cookie?

I love to make cookies every year. Oh, and fudge, love the fudge. But it is a huge undertaking so believe me, the spouse appreciates the fact that you notice.

What a good husband you are!

ok I am drooling....I am glad you appreciate everything she does...and that you acknowledge it in front of your son albeit,maybe a little overboard, but I think he got the point....

Son will make a good hubby someday.. if he remembers :)

Yes, it's a very industrious time for the spouse - that means me in me in my household. Are you going to keep blogging over Xmas? I need to take a short break as I have two academic papers to write, but I'll keep going as long as I can.

As I read your story of College age and other age children I chuckle to myself and ask the timeless question, "Will we ever be done raising the children?" Mine are all well beyond the college age and when they gather a referee is still needed and I just shrug because I am neither the Parent in Charge or a referee...

Sigh heavy sigh as the fudge cools in the distance with several inches already consumed...

MERRIEST OF CHRISTMAS DAYS TO YOU CRUMUDGEON AND TO THE LSS ALSO....