Worst behavior in sports for 2006

This is Fred Mitchell's story in yesterday's Chicago Tribune. Please note the heavy emphasis on youth sports in this recitation of the year's worst sporting behavior:

The Positive Coaching Alliance offers a year-in-review "Bottom 10 List" of the worst behavior in sports, from peewees to pros, to stimulate discussion about honoring the game among parents, coaches, players and educators.

10. Moments from ending his stellar soccer career at the World Cup, France's Zinedine Zidane is ejected for head-butting an opponent who insulted Zidane's sister.

9. Cubs catcher Michael Barrett ignites a 10-minute bench-clearing brawl by sucker-punching the White Sox's A.J. Pierzynski after a collision at the plate.

OK, this one was just plain stupid. Entertaining, but really stupid.

8. Denver-area parents must break up a fight between coaches of opposing 7-and-under girls soccer teams, resulting in one of the coaches facing assault charges.

Seven and under! Are they even keeping score in a 7U game?

7. A football brawl between Miami and Florida International results in 31 player suspensions and the unforgettable image of a player swinging his helmet as a weapon.

And a Miami announcer, former Miami player Lamar Thomas, loses his job because of his colorful color commentary during the brawl.

These were the offending remarks, as quoted in an AP story by Tim Reynolds (posted on Yahoo! Sports): "'Now, that's what I'm talking about,' Thomas said as the brawl raged out of control. 'You come into our house, you should get your behind kicked. You don't come into the OB playing that stuff. You're across the ocean over there. You're across the city. You can't come over to our place talking noise like that. You'll get your butt beat. I was about to go down the elevator to get in that thing.'"

6. The Tennessee Titans' Albert Haynesworth is suspended for five games after stomping the helmetless head of the Dallas Cowboys' Andre Gurode, who required 30 stitches.

5. At a Philadelphia-area football game for 5- and 6-year-olds, a player's father allegedly brandishes a .357 Magnum during a dispute with a coach over his son's playing time.

I don't know whether this is a factor in aggravation or mitigation that it took place in the Philadelphia area. The reputation of Philadelphia fans is well-known... and apparently entirely deserved.

Brief digression, for illustration purposes: Middle Son is ushering these days at Bears games in Soldier Field. At a recent game a woman -- wearing the other team's jersey -- complained that she was being harassed by Bears' fans.

I'm not Security, he explained.

"Well, what good are you?" she exclaimed.

"Why don't you tell me what happened?" Middle Son was doing his best to calm her down; he could tell she was very upset.

"I'll get Security," said Middle Son, and he did. (And, yes, the offending "fan" was ejected.)

When Middle Son told me this story, Oldest Son was also in the room. This was his take on it: "Imagine," Oldest Son said, "how much worse it would have been for her if she'd been in Philadelphia."

But that charming family vignette concluded, let's return to Mr. Mitchell's list. This one may be the worst of all:

4. When two high school sports stars are sentenced to 60 days in juvenile detention for a "prank" that left one man physically disabled and another brain-damaged, an Ohio judge rules the players can complete their sports seasons before serving their sentences.

What the heck was the justification on this? You wouldn't want their school to lose in the playoffs because of an error in judgment? It's OK to pause a moment here while you stop cringing. 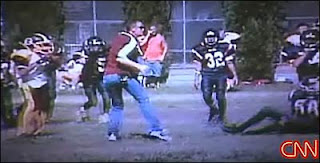 3. A Stockton, Calif., youth football coach is caught on tape charging the field to level an opposing 13-year-old player who had just been flagged for a late hit on the coach's son.

2. A Corpus Christi, Texas, youth football coach is caught on tape attacking an 18-year-old referee who said the coach grew angry when asked to stop swearing in front of the 5- and 6-year-old players.

And the "winner" -- according to the Positive Coaching Alliance -- is:

1. A tennis father in France is arrested on suspicion of drugging opponents of his 16-year-old son by tampering with their sports beverages, one of whom dies in an auto accident while driving home after a match. The father pleaded guilty and was sentenced to eight years in jail.

I suppose this has to be the worst because someone actually died... but that Ohio story is pretty awful.

Sports can build character and a sense of responsibility; I've seen it with my own children... but, sometimes, it's not just the kids that need the character development. The PCA wants to stimulate discussion, so let me pose the question: How do you keep the wackos out of your kids' sports teams? How do you address these issues with your kids?
Posted by The Curmudgeon at 4:15 PM

Because of my son's disabilities I will won't have opportunity to participate in a "normal" sports environment. My daughter has chosen not to play the team sports of most of her peers. Instead she is participating in team dance competition. Interesting that very few males are in those competitions. Perhaps the lack of testosterone on the sidelines make her events less dangerous? Note: the above comment was made by a father.

One other thought. The twin daughters of a close friend are big soccer participants. She told me awhile back about their league rules. If a parent is getting a bit out of hand the referee stops the game ONE TIME and warns the coach to quiet the parent or remove them. If the ref has to stop the game again the team forfeits it's game.

Also their Sunday games are "quiet" games. Parents nor coaches cannot say a word during the match or risk a forfeit.