This may explain why New Year's is so scary... for parents of a certain age.

And, of course, the teens and post-teens are neither invincible nor immortal. As tragic stories every New Year's Day make so painfully clear... but only to us... not to them.

I've thought about this a lot lately and I've come to the conclusion that we should believe the kids when they say they don't think they're immortal. Or invincible. They probably don't think much at all.

At best, they have a vague notion that they are safety-conscious, responsible people, the ones we've labored so hard to develop. And some of them really are.

Not that it would make any difference to the stoned zombie driving the wrong way on a one way street with no headlights at 4:00 am, or the drunk flying west up a hill in an eastbound lane in a pick-up truck now converted to battering ram.

That's the problem of having an imagination: Sometimes I use it. And I worry.

Sure, I was little better: I remember one New Year's Eve living out near where Christ lost His shoes, announcing to my horrified parents that I would be driving into the City to celebrate the holiday. In a snowstorm.

But as I remember the story, I didn't go. And I was... at least eventually... OK with that.

But the world changes: I've just dropped Oldest Son off at Union Station. He's going to the Sugar Bowl, in New Orleans, with stops en route in Springfield, Illinois and Memphis, Tennessee, picking up friends at each stop. Only the first leg is on Amtrak.

Of course, taking the train is better than driving... but we are talking Amtrak.... (Sorry, imagining again....)

And Middle Son has informed us that he and most of his far flung social circle are going to Champaign to ring in the New Year. They'll be driving. But, he informs us, somewhat surprised, that we weren't the only parents who have insisted that the group leave... and arrive... early. And stay put.

And Younger Daughter will insist on going somewhere, too. Anywhere. As long as it is not her parents' house. 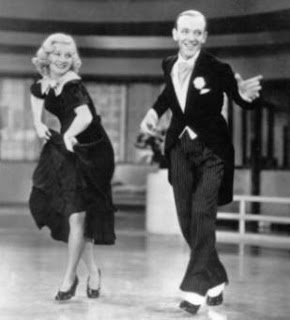 Long Suffering Spouse and I will not be tripping the light fantastic in some swanky venue tomorrow night. After watching the Bears' game, our New Year's glamor will be confined to the TV screen -- where we will live vicariously, for another year, through the adventures of Fred Astaire and Ginger Rogers. We'll wait anxiously until all the kids have checked in. This year, we'll probably have to wait until some time Monday afternoon.

Perhaps when our children have children of their own -- when they're all safe at their own homes -- maybe then Long Suffering Spouse and I can go to a formal New Year's Eve gala. If they still have them.

And then the kids could worry about us.

we are going to take advantage of time zone shift and celebrate New Years on Scottish time. So at 6pm we'll have champagne or whatever and ring in the New Year. If we are still awake at midnight, then we can do it again, if we like.

curmy wanna' hear something funny? they REALLY do worry!!!! hahahahahaha
finally the shoe is on the other foot.... i just love it!!!!

we are going to key west next week and not telling anyone, they will have to read our blogs to find us! the evil parents!!! muhhhh huh huh

TV watching is a good idea. I'd sleep before if it wasn't for the fireworks that always go off nearby.

(I'm challenging everyone with word verification to turn it off for one week.)

oh you are not alone. As my girls get older and venture out for New Years celebrations I too worry for their safety...I have often caught myself saying it's not you I worry about doing stupid things it's others and how their stupid actions might impact you. Be careful is what I say! Once a parent always a parent.

I too will be bringing in the New Years at home...

My Mom had 4 kids, I don't know how she survived. I am so not looking forward to my kids driving. Can't we just tie them to a chair or something? No?

Happy New Year! I hope everyone made it to their destinations (and home again) safely!

no, don't talk about kids driving..it is driving me insane already, and my eldest is only 3!

I hope everyone made it back home in one piece.

Happy New Year to you and the LSS.

Hey, while searching for widgets for my blog, I stumbled upon www.widgetmate.com and wow! I found what I wanted. A cool news widget. My blog is now showing latest news with title, description and images. Took just few minutes to add. Awesome!