The news intrudes at Christmas party

I was in a cab on my way to a Christmas party last Friday afternoon when I heard that there was a "hostage situation" at the "Ogilvie Transportation Center" in downtown Chicago.

It took me a split second to translate from Official Speak to Common Usage. The bulletin described a train station officially named in honor of a former Illinois governor, Richard B. Ogilvie. Ogilvie was actually elected Cook County Sheriff and County Board President -- as a Republican -- in the 1960's. (Things were different then: In the '60's Cook County Republicans were only an endangered species; they are now similar to the ivory billed woodpecker... recent sightings mean the species is probably not extinct -- but no established population can be found.) Ogilvie helped secure passage of Illinois' first income tax and he lost his re-election bid. Whether you find cause and effect there is entirely up to you. 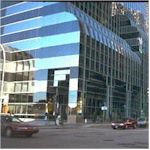 It's probably not because of lingering resentment over the income tax -- most of the people who use that building every day have probably been subject to the state income tax their entire working lives -- but nobody ever actually calls that building the "Ogilvie Transportation Center."

But there is no Chicago & North Western Railroad any more. It was merged into the Union Pacific more than a decade ago. And the North Western trains had been operated by Metra for some time before that.

The news report on the cab driver's radio did not provide more specifics, except to add that no trains were going into or out of the City. 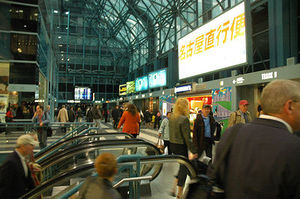 That was going to complicate the commute home for a lot of people, but not for me. I take the Blue Line.

I'd been doing arbitration duty on Friday, so my cell phone was off. I thought about turning it on because I knew that as soon as my mother-in-law heard the news she'd immediately conclude that I was one of the hostages... and she'd be on the phone to my Long Suffering Spouse... who would then call me. I don't think that's wishful thinking on my mother-in-law's part; I prefer to ascribe it to a natural fatalism. But I was already three hours late to the party and I just wanted to at least get there before being summoned home.

This party was being given by my ex-landlords. They've been very nice to me and I was pleased to be remembered with an inivitation to their annual Christmas shindig.

When I arrived, though, I found that the hostage situation was very much the topic of discussion. I learned that the gunman was holed up in a law office and that lawyers may have been shot. Someone observed that, if lawyers were really being shot, the story would probably be reported as a feel-good story for the holidays. Lawyers are only slightly more popular than the ebola virus -- but we know it, and humor, and often dark and cynical humor, is one way in which we cope.

I figured I'd better turn on my phone. It rang immediately.

"Where are you?" Long Suffering Spouse demanded.

"At a Christmas party in Lakeview. Remember?"

There was a slight pause while she remembered we had indeed talked about my stopping at this party. "Oh," she said, "but how are you getting home? My mother said all the trains going into and out of the City are stopped."

"It's just the North Western trains." I could have said Metra Union Pacific, which would have been more accurate... but would have required translation. I assured her that I'd be home at a decent hour... and I was.

The Sun-Times this morning has a number of stories about the shooting, from an eyewitness account of a survivor, to stories about the victims' families. It is truly heartbreaking stuff... and all because of an unhappy client.

Over the weekend my wife reminded me of one truly scary ex-client that I had. But I told her that if all the crazy disgruntled clients shot their lawyers, it wouldn't be news any more. The fact that this made national news shows just how really rare it is that an angry ex-client goes to this extreme.

I'm not sure that this made her feel any better.
Posted by The Curmudgeon at 8:46 AM

they'd be going all "client" instead of postal, huh? sigh... i think around the holidays people have such high expectations and when things don't go their way, then they freak.... sorry for lss's angst though, i do know how that feels.........bee

Hey there, contracts exam is Tuesday. Glad you made it home from the party without incident. How was the arbitration? You should write a post about it. take care.

well curmudge...I am glad it wasn't you and that you are safe...as I am sure is your long suffering spouse.

But you do hear about the disgruntle employees, clients, general public just pissed off at the world that take their extreme frustrations out on anyone who gets in their way....We share this planet with some interesting characters I must say.

OBTW, I sure hope Mike comes to visit your site..he is crazy about trains...I think he might enjoy your history about the trains.

Quite a story; there is a serial killer on the loose in the town of Ipswuch over here right now.

Jean-Luc means Ipswich, it's the story I've been writing about. It is now feared that 5 prostitutes are missing/dad - at least, a truly terrifying situation, it is only 1 hours drive from my home.

I love your train, it looks as if it came straight from Disney, ours are a disgrace compared to that.

You certainly have an eventful day here.

Interesting and but scary interesting.
I wonder how many people are just on the edge like that
Just jumped over here from When I Grow Up.
I'll come again.

For all the bad press lawyers get, when folks are really in trouble or having a crisis, they rarely call anyone but their lawyers. I remind people of that now and again, and then they ask, "Yeah but how can you defend someone who's guilty?" Then I explain how poeple aren't guilty if they are being tried, not till the jury is back.

Suddenly it's clear to me why I never get invited to Christmas parties.


Glad you are OK. Next time, turn your phone on sooner, LSS will be relieved.

oh u dont know how bad it is to be in a party and ppl back home think ur a hostage..stay safe and a happy christmas??