They're "out of uniform" and I'm late again 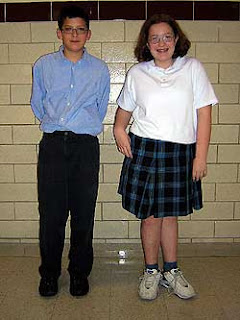 All my children have attended Catholic schools (and, no, these aren't any of them -- the accompanying illustration is brought to you through the miracle of generic image searching).

One of the many advantages of a Catholic school -- speaking from the parental perspective, you understand -- is the requirement of a uniform. When I was putting on the lovely maroon clip-on tie in 6th grade, I wasn't nearly as wild about it.

Uniforms eliminate a lot of arguments: There's none of those 'you can't wear those jeans' or 'cover your belly' discussions with your kids becuase they have to wear the uniform.

Except on out of uniform days.

Yesterday I made an appointment to meet a new client at her place of business. I asked her to come in early because I'd be 'in the neighborhood' dropping Younger Daughter off at her school for Band class at 7:00 am. I'd be there, I told her, by 7:15.

But I did not know that it was an out of uniform day.

So I neglected to build in time for negotiation.

"You can't go to school like that," shouted Long Suffering Spouse as Younger Daughter tried to break past our room and down the stairs before she could be seen. "Come here and let me see you."

I don't see how Long Suffering Spouse could have seen Younger Daughter anyway -- she must have just assumed that there would be a problem.

Which, of course, there was.

"I'm wearing a shirt over it." 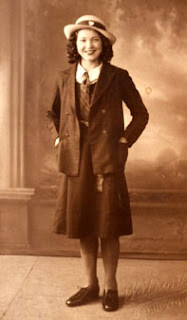 "We got a letter from school. It's on the bulletin board. It says 'no halter tops' -- it doesn't say you can wear a shirt over it."

"Ma-ahm!" That's the two syllable substitute that teenagers use for "mom" when their blood is up.

But there was a letter: They have to send letters now because, when freed from the tyranny of the school uniform, the girls tend to, uh, overcompensate.

Eventually, Younger Daughter settled on a white t-shirt. That she apparently took from her little brother. A few years ago.

Long Suffering Spouse started to challenge this fashion choice, too -- but Younger Daughter carried the day with, "It's Black and White Day" (these being the school colors). And her pants were black.

And t-shirts weren't specifically mentioned in the letter.

But I'll bet they'll be mentioned in the next one. And if she didn't get a detention for her t-shirt, she probably got one for being 15 minutes late to Band class.

I really hate out of uniform days.
Posted by The Curmudgeon at 10:12 AM

Sorry. But I did. We were taught by nuns back in the day and yes, they could still use the ruler. I never had that happen, I was already way too cowed by thoughts of mortal and venial sins.

Dress codes were the least of my worries.

well when i went to school there were dress codes that are prehistoric i am afraid, curmie my friend. no pants, no jeans, long-ish skirts, tie shoes (oh for crying out loud!), blah blah blah, but we didn't know any different and just did it. we were so dumb.... bee

if i were in younger daughter's shoes, i would logically question the logic of this out of uniform day. so, my question as a nonteenager is: why have an out of uniform day at all? if it is to give the students one day of individuality or a chance at having a choice, but still dictating what not to wear, what is the point? i would have been happy to just wear the uniform all five days and just go crazy with my owb chosen outfits when i am not in school.

just my two cents. and yes, a letter will certainly come :)

I was a product of catholic education as well (at times), and I loathed the uniform at the time. The skirts would hit right at the knee which was unflattering, so everyone perfected the "rolling the waistband" move to make it a little more trashy. haha.

I was proud of my school uniform and wore a straw boater in the summer months.

Both my sons wore smart uniforms for their secondary school too, including a white shirt, tie and blazer. They look smart, like they are going to work to do a serious days work, that's what I always told them.

Casual days at my office is a mess. People come in really filthy outfits.

cute post! I love the ma-ahm... I hear that often!

hate that 2 syllable Ma-ahem.
hopefully this publishes, not liking this beta thing - seems like a private club, that i have to join i guess.

sqt -- Fear of nuns and falling into mortal sin was part of the experience. They don't have nuns anymore... and I think our kids have lost something important because of it.

rdl -- What did Groucho Marx say about clubs? He wouldn't belong to any that would have him as a member? I did the Beta conversion because I want to tinker with the formatting... and Blogger is warning that not all the tinkering might transfer over.

bee -- Nothing dumb about it. Actually it takes the guesswork out of getting dressed in the morning.

may -- I just don't understand why the kids think they should dress like they're in a rap video because it's an "out of uniform" day. Which ties into what Jean Luc said: Some never learn how to dress appropriately and it spills over to Casual Friday.

And ellee -- how loud did your kids groan when you said that?

In the UK, where i hail from, everyone has to wear a school uniform from age 5 to 16. I didn't like mine and often got in trouble for shirt being not tucked in, skirt being rolled up to high and wearing wrong socks! but looking back now i am glad i didn't have to wear normal clothes!
Clairex