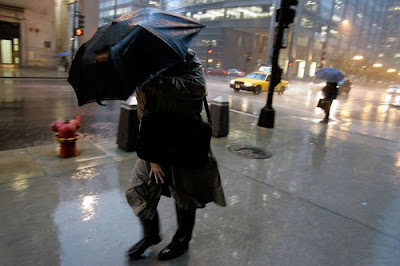 Image captured from the Chicago Tribune.
It was supposed to be Younger Daughter's first day of school today. Youngest Son is already in school; he was supposed to have his first football game tomorrow. And I had a dentist's appointment early this morning.

But it rained yesterday.

This is already the wettest August on record in Chicago: This is supposed to be the season where the lawn turns a nice shade of cut-me-every-other-week brown... but it looks like April out there. April in South Florida.

And then, yesterday, I took a quick peek at the radar screen about mid-afternoon -- and saw some very ominous looking yellow, orange and red storms rolling across DeKalb County, just about to enter Kane... and seemingly taking aim at the City itself.

Long Suffering Spouse had to take Younger Daughter to the doctor; they arrived as those blobs became very real rainstorms over the Chicago area. It was about an hour after I'd first noticed the ominous radar.

Those storms were moving. I heard later that there were straight line winds associated with the storms of 70 mph or more. Middle Son was at home yesterday afternoon; he checked in with Long Suffering Spouse before leaving on his afternoon errands because of how incredibly dark it had become. In the afternoon.

Just after noticing the radar I looked out the window: It was bright and sunny.

I looked again an hour or so later, when Long Suffering Spouse called to tell me the storm had hit; that there was rain swirling in circles inside the parking garage. And, when I looked, I saw that night had fallen prematurely. All heck broke loose downtown shortly thereafter.

One of the attorneys with whom I share space at the Undisclosed Location had to take off during the height of the storm: A couple of large trees had given way to the winds and had taken up a new, uprooted position on the roof of his house.

We were fortunate at the Curmudgeon household; we had no real damage. Some basement seepage. A few downed branches. But nothing to compare with the stories Long Suffering Spouse and Middle Son returned with when they picked their way home from their separate errands, around downed trees and through busy intersections where the streetlights were out. We didn't even lose power at home. A quarter-million people in the Chicago area couldn't say that today.

And I was right about the course that storm took: It seemed to leave a particular swath of destruction right down North Avenue. Several suburbs along North Avenue had "boil orders" today for their tap water.

I waited out the rush hour at the Undisclosed Location, but there was still quite a bit of rain for my umbrella when I finally ventured out.

Getting off the el, I was struck by the Western sky: The Sun was setting and there were breaks, cracks really, just enough to let orange light leak out and set off the still-ominous, but now navy blue clouds. It was a Maxfield Parrish orange; the blues were too dark for him, though. And there was lightning north and east, some of it quite spectacular.

And another line of storms rumbled through later last night.

And this morning, before 6:00 a.m., we heard on the radio that both Youngest Son's and Younger Daughter's schools were closed. The dentist's office called an hour or so later: They didn't have power either, so my 8:00 a.m. appointment had to be canceled. But I couldn't reschedule -- not yet -- no computer.

And that, boys and girls, is how we had a Snow Day in August. I don't know what else to call it.
Posted by The Curmudgeon at 4:05 PM

i just want the rain. not storm. man, it is so hot here that we sweat in places we don't really want to disclose. i mean, saying it will be way too much information.

Send all you want this way. We are something like seventeen inches under average.

Gosh, in the summer (heck, for six months of the year) we have no change in weather (yes, it's just...hot).

What's with the windy City weather anyway? It's too cold and snows too much in the winter. It too hot and humid in the summer. Now it rains and storms too much. Snow days in August? The old saying about if you don't like New England weather, wait a minute? Sounds more applicable to Chitown

Sounds like a toad strangler of a storm. Glad you and yours are all OK. a quarter of a million people is a lot of people without power. Hope it is quickly resolved.

Sounds like crazy weather where you are. I am in Brisbane and the weather here has also been out of the ordinary. My home in Indonesia is also experiencing rain when it is supposed to be dry. Perhaps all the effects of global warming?

You made me feel like I was right there watching!

Thanks Curmy......you never fail to keep my attention.

It's been bad here in britain as well.

It was a nice, sunny, cooler than normal week this week. The heat finally broke a bit.

But then, our weather apparently doesn't occur until winter when we get a token blizzard or two.

No flooding and no trees down here (we did the tree thing already this spring, thank goodness). The Rock is just about at peak, though. Fortunately, I live way above flood line. I bet the insurance agents are having nightmares.

Those storms hit us, too.. but not as badly as the Chicago area. I heard there was a lot of flooding there.

My internet was down almost ALL day yesterday.. but somehow I managed to survive. :)

I'm glad you're OK. I was wondering how your house held up during the storm.

Those of us who live in the southwest corner of OHIO could use a day of rain. PERIOD END OF DICUSSION.