Can children be seen and not heard? Dining out with children.... 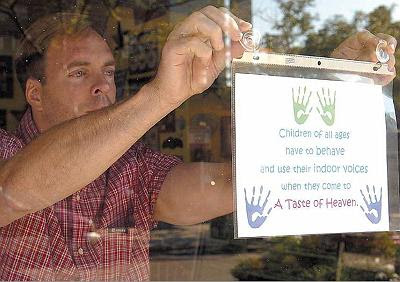 The picture above ran with Misha Davenport's Sun-Times article. It shows restauranteur Dan McCauley and the sign he posted a couple of years ago at his restaurant, Taste of Heaven. The sign reads:

Children of all ages have to behave and use their indoor voices when coming to A Taste of Heaven.

Believe it or not, this sign was immediately controversial: "A couple of parents got ahold of a local school e-mail contact list and let everyone know they shouldn't patronize us," McCauley told the Sun-Times. Before long, the debate went national: ABC's 20/20 program, MSNBC (the link is to a 2005 AP story on the MSNBC website), and even the New York Times (*genuflection optional*) picked up the story.

McCauley has no children of his own. He has been excoriated as "anti-child."

Speaking as a father, I say McCauley seems to be speaking with the voice of sweet reason.

Taking children out to eat can be stressful -- at least at any restaurant that doesn't have a gameroom, high school kids walking around in rodent costumes, or animatronic musicians. It is, however, sometimes necessary.

My parents, before their health declined, wanted to take my children out to dinner. Once or twice they even tried to 'show them off' to friends.

I do not believe there was any connection between my parents' sudden decline and their attempting to dine with my children -- but the experiences were not always pleasant.

"Real" restaurants -- the kind with waitstaff and tablecloths -- take time. A "kiddie cocktail" (some variation on cherry juice and 7-Up, preferably with the cherry as a garnish) can keep the kids occupied for a little while while the adults get their drinks. Of course, if you must dine with children, you might be advised to skip the cocktails for once and order as quickly as possible.

But that was not the way my parents operated. They wanted a drink before dinner.

Knowing the ordeal that was to come, I sometimes managed to snag two drinks.

And, another thing about "real" restaurants -- the kinds without multicolored plastic balls and gerbil tubes in which the kids can disappear -- the meals tend to come out (for lack of a better word) piecemeal. Drinks. Then appetizers. Then salad. And only then the entree.

Meanwhile, the kids, having guzzled a couple of Shirley Temples, are staging sword fights with the stems of their cherries. Or maybe with their knives.

Even reasonably-behaved children are not the most patient people in the world -- and they certainly don't understand that you'd sit still for a couple of hours and like it while strange-looking food is brought out in dribs and drabs. Oldest Son was by far the least patient of our brood. He was like this as an infant; I can't imagine him submitting to a gracious dining experience even now. Even if his business clients want to.

And you can't really expect children to wait for that hamburger when there's bread to eat... nor can you be too disappointed when the hamburger is barely touched by a bored child who has gorged on bread.

I think my parents forgot why they didn't take us out as a family when we were little. It wasn't just money.

Still, unless you count that linked story about Oldest Son (at which, thankfully, I was not present), we never had meltdowns in restaurants, nor would we have tolerated them.

Over the years, we've gone on trips and had to eat out as a family. We chose our spots: We could never afford really fancy places even if we were so inclined. And we tried to come in before or after the dinner rush so the waitstaff would be less stressed. A lot of times we'd eat at the restaurant in or adjacent to the hotel where we were stopping for the night. After having a couple of meals during the day from a cooler in the car (when we traveled we drove straight through as much as possible), getting out of the car and stopping to eat was actually a treat for the children. And they responded.

For the most part.

There were actually times when people approached me and Long Suffering Spouse in restaurants and complimented us on our children's behavior.

(Of course, we always kept the cattle prod discreetly under the table, hidden from public view.)

Children are not miniature adults -- but neither should they always be wild, free range monsters. Sometimes they should be adults-in-training. Because that's a big part of what parenting is all about: Training children to become adults. Hopefully. Some day.

Just be sure to order an extra drink for yourself when you take them.

And extra napkins for everybody.

Bon appetit!
Posted by The Curmudgeon at 11:07 AM

Email ThisBlogThis!Share to TwitterShare to FacebookShare to Pinterest
Labels: Family, News and Views

oh curmy i am so glad mine are grown now. i can usually take them out without too much fuss nowadays! ha ha

Many parents don't like the way other parents behave, but woe betide if someone rightfully calls their children unruly.

threats and bribes are always good

My children treated going out to dinner as a treat. The more prestigious looking the dinning area the more they were impressed.

I think part of the problem with children running wild in restaurants has more to do with the personality of the child. My children have calm personalities and very rarely have fits unleashing pent up energy. Some children just have way too much energy to contain themselves for long. It does not make them bad children.

As a child going out to eat with my Grandma � she never let us drink our soda or water until we ate everything brought to us. I thought this was cruel punishment at the time but now understand she did not want us to be so full on water we did not eat.

At some point before I was ten years old (because that's how old I was when my dad passed away) Dad and stepmom got a compliment on our behavior at a restaurant. It was a good moment for the kids as well as the adults!

I think a lot of which you wrote is a sign of the times. Kids (in general) are not brought up with the manners that we older folks were.

I think adults do a disservice to their children if they don't teach them to behave. Kids will be kids, but that doesn't excuse parents who allow their kids to act like wild monsters when the are out in public.

I was taught at a very young age what was appropriate behavior and what was inappropriate based on where we were or were going. We had a verbal checklist before we entered certian situations, of course, led by Mom and backed by Dad. Knock on wood, so far so good at 11 and 13(my children's ages).
Great post!

Great post and great blog, though I may be stating the obvious. I have added you to my blog. Whilst, I may not have the fortitude to post everyday I shall now have a link to a blog that is entertaining and insightful.

And there was much rejoicing - yay.

As my kids were growing up they always had "restaurant manners" that they best be using in any non-fast-food restaurant. They knew how to behave...and rarely did we have any incidents...at least not in restaurants...