The title of this article, by Dion Nissenbaum, of the McClatchy Newspapers, Hamas TV's child star says she's ready for martyrdom, is self explanatory.

Remember Saraa Barhoum? You may not recall the name, but you may recall her on-air partner of recent months: Farfur (or Farfour, the English spelling varies) the Mickey-Mouse lookalike who promoted terrorism, murder, and an endless cycle of violence and vengeance to Palestinian children. 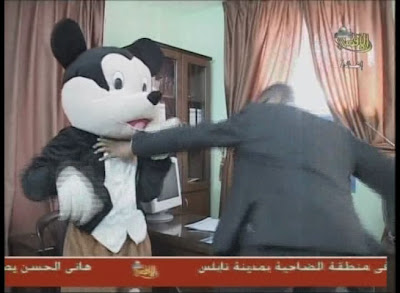 This image was taken from Deborah Lipstadt's Blog (f/k/a "History on Trial"). It shows a scene from Farfur's last appearance on the show, where he is "murdered" by an Israeli. You can read about this episode of this so-called "children's show" here.

Professor Lipstadt closed the linked post with this statement: "Next time I hear about a young person volunteering to be a terrorist I won't be surprised."

Now Saraa Barhoum has volunteered.
Posted by The Curmudgeon at 8:40 AM

Email ThisBlogThis!Share to TwitterShare to FacebookShare to Pinterest
Labels: News and Views, Soapbox