Technically, painting wasn't Adolf Hitler's hobby; it was, at one time, his ambition as a career.

I suppose all this is well known.

It was certainly known to Winston Churchill, who nevertheless derided Hitler as an "Austrian house painter."

Churchill was also a painter, taking up painting during World War I after being dismissed as First Lord of the Admiralty. 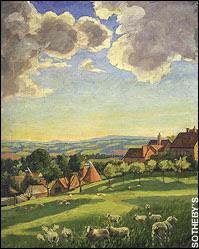 Churchill favored landscapes in his paintings. In fact, Churchill's painting of his home at Chartwell sold last month for £1,000,000.

Surely Churchill's eloquence and fame as a war leader has enhanced the value of his paintings, but the Wikipedia biography of Churchill notes, "In 1921, Winston Churchill's artwork was exhibited at the prestigious Galerie Druet in the Rue Royale, under the pseudonym Charles Morin."

His book, "Painting as a Pastime" can be found on Amazon "from $2.97" -- but according to this site a signed first edition of that same book will set you back around $7,500.

Now that's some hobby.
Posted by The Curmudgeon at 8:46 AM

No talk of scrapbooking or crocheting here!

What an interesting post. I knew about Hitler.. but not about Churchill. I think if I were to buy his book it would be from Amazon. :)

Very interesting! I didn't know any of that.

Thanks for the comment on my site...that was funny about how the picture albums start to disappear with each additional child....did my little brother even exist??

Things I did not know.

Way Cool! You made it about history, one of my favorite subjects. I'm big into Holocaust and WW2Germany. Great idea!

what a great post!! I knew some of this stuff because my hubby is big into WWII history and art history. Excellent

I knew Chuchchill was an artist. He was also a bricklayer. Laying bricks was a way to pass the time.

It just goes to show that Germans should stick to printmaking and the rest of us can do originals. So throw a bratwurst at me during Oktoberfest. Just don't waste a good German beer.

I love posts like this. You have made connections and connections and its so good. I knew churchill painted but never saw one (altho i had seen one of hitler's in a book somewhere); I really really like it. Love your style and sense of humor.

I have something for you on my blog. I made up an award and you are one of its first recipients. :)

This was an interesting post. Never knew these facts.