How the Curmudgeon participates in the parish golf outing

Golf is a game whose aim is to hit a very small ball into a even smaller hole, with weapons singularly ill-designed for the purpose.

I am not a golfer.

I have nothing against golfers, mind you. I am simply unwilling to surrender myself, body and soul, to the game -- that being the minimum that one must do in order to (someday -- maybe someday) become adequate. 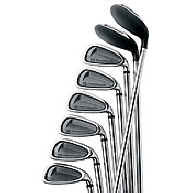 When I practiced with a firm we had to participate, from time to time, in golf outings; once or twice we even staged one. But since there is nothing quite so maddening for a real golfer than to have to go around the course with a duffer, and since the purpose of these exercises was to get (not lose) business, I always managed to stay behind. Someone had to watch the store, my partners would say if anyone inquired about my absence, and then I'd drive up and join them for dinner. My partners would make tut-tut noises about how sorry they were that I had to miss the fun and I would express deep regret at not being able to join them.

My Act of Contrition was silent, but sincere nonetheless.

Still, I was at one time willing to play golf -- as long as I could go around with other similarly inclined duffers.

My views on this subject were well known to others in the parish, some of whom were indifferent or even terrible golfers like myself. One of these decided to organize a foursome for the next parish golf outing, always held sometime after the Labor Day holiday. The trouble was finding two other golfers quite as bad as we were.

We interviewed several of our friends -- all of whom professed no talent for the sport. But that's the way with golfers, isn't it? No one ever claims to be a 'good' golfer; somehow, however, some people manage minuscule handicaps.

Every one of our fellow parishioners who even knew what a handicap was was immediately disqualified.

But then the questions had to be more carefully put. This is where I was able to use my legal training.

People would squirm at this: No one who plays with any regularity wants to admit that he doesn't, at least occasionally, shoot less than 100. On the other hand, no one wanted to say that they did so regularly; in the context of our discussion, that would be tantamount to claiming to be "good." I say again: No real golfer claims to be good.

So I would pounce before they could formulate an answer. "No, no, I wasn't clear," I would say. "Have you ever broken 100 -- on a nine hole course?"

Most people laughed; they were eliminated. A couple slumped in embarrassment: No, they said.

We had our foursome.

It was a great act of Christian charity that we four were to perform at this outing: We were certain to finish last, thereby giving satisfaction even to the foursomes composed of octogenarians with breathing tanks and walkers. Our sacrifice would bring a moment of satisfaction for everyone else: At least, they could say, in truth, we were better than Curmudgeon's foursome.

But we played our part too well.

Somewhere in the course of our back nine (it was a scramble event so we all started at different holes) we noticed that no one was playing through us anymore. The course authorities stopped sending round the beverage cart and began dragging the water hazards. We were feared lost. Someone suggested calling the police.

Cooler heads prevailed, though, and one poor fellow was designated to maintain a vigil at the clubhouse -- which he did, with increasing impatience, waiting for our foursome to straggle in.

We'd been out at least six hours.

"Don't you know," he snapped at us, "that this was a Best Ball tournament? How could you be out there so long?" This from a nice man who never snaps at anyone.

But I learned something that year: The Parish Men's Club invites businesses to sponsor holes or supply prizes for the golfers who participate. For the last few years, the price of sponsoring a hole has been the same as the entry fee.

So every year now I sponsor a hole. Everybody's happier that way.
Posted by The Curmudgeon at 1:23 PM

I used to play in a charity tournament that used the scramble format. I (my right hand is raised, now back at the keyboard) am not a good golfer. We would put together a foursome and play honest golf. After the play, the raffle and the awards event was held; for three years in a row we got a trophy for "dead assed last," our best score being two or three over, horrendous for such an event. The announcer did give us credit for either honesty or stupidity. We always got applause,laughter and incredulous looks.

yeah I played one year cause it was corporately appropriate. They started me off with the fake golf balls that exploded on the first tee. Fun Guys.

From then on...I drove the beer cart...WAY more fun.

Everyone is happy to see you. You get to ride around in a fun little car....all the beer you can drink....nothing explodes. smile...

I used to play in a league when I was back at the police department but I haven't played in years because of my back. I miss it - especially the annual "best ball" tournament we used to play.

Getting old is not fun!!

this is sooo funny!!! we did the same thing last year for the fern house fund raiser. we live on a golf course and can't play. so, we just write a check and everyone is happy...

I've only played mini-golf. Ralph played some golf in his walking days. He thinks I would enjoy it.

I'm sure there's a joke in the last paragraph, but I'm not going to go for it...

I am not a good golfer.

But I did shoot 76 once on a par 70 course. I should never have touched a golf club again after that day...

I've been playing the game 20 years next year, which is a thought too frightening to contemplate, but it's a great game, I've had some good times.....and I've broken a few clubs.....

"I am not a good golfer.

Katherine -- I've offered to drive the beverage cart, too, but some responsibilities may be beyond me.