With a title like that, you know what this post is going to be about, don't you?

Why Sports, of course. 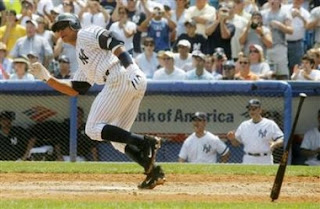 My poor White Sox, for example, have just finished stinking up the Bronx, winning only one of three games from the hated Yankees. The Sox gave up home runs to nearly every member of the Yankee roster. I had my hands over my face so often during the series that I can't be sure if one or two Yankee pitchers might have launched dingers... and they don't even bat. (I have to state the obvious for Bee's sake -- and Chris's). The only Yankee who didn't get a home run during the Sox series was Alex Rodriguez. That's because poor A-Rod is stuck on 499. There's no great distance between 497 and 498 or 498 and 499 -- but there's a yawning chasm between 499 and 500.

Just ask Barry Bonds, who's found it so difficult to move off of 754 home runs and tie and pass Hank Aaron. (Note to Bee and Chris -- don't really try and ask Bonds: He'd probably just snarl at you. If you're lucky.)

And it's not just the larger numbers that are irregularly spaced. It turns out there's often an immense gulf between the numbers 2 and 3.

We've just finished Youngest Son's baseball season. There's been a tournament every weekend in July and he's played a lot of games. And we've seen it time and again -- both when we've been in the field and (although not as often) when we've been at bat: Getting those first two outs seems easy enough... but getting to that third out... oh, brother.

I don't know why they don't teach this in school. It's probably because they can't quantify it in a neat formula like the reasonable-looking (although, as we've seen, inaccurate) formula:
(n + 1) - n = 1
Is there a math teacher in the audience who can tackle this problem and report back?
Posted by The Curmudgeon at 12:20 PM

Email ThisBlogThis!Share to TwitterShare to FacebookShare to Pinterest
Labels: Education, The Sporting Life, Things you never knew -- and never wanted to know either

Is it all to do with maths? Only how much a team loses by.

Launch a dinger? Is that bad, or do you get extra points for them or something?

All I am going to say here is that I am glad that the people in Chicago have the good sense to hate the Yankees also!

well i saw bee and chris and my eyes glazed pretty much over the rest of it honey. but i tried! i know, it's sports, right?

Linda -- only half of us hate the Yankees. The other half hates the Mets.

And, Chris, the closest I came to becoming a soccer fan -- probably seriously considered it for close to a nanosecond -- was during the last Yankees / Mets World Series. I didn't know what to do.

I like the Red Sox way better than the Yankees, but live in southwest CT, which is more NY territory. Perhaps you can answer a Chitown question some dweebs on the east coast wonder about: Is the South Side/North Side Sox/Cubs rivalry that great, is there a line in some avenue where you might have to keep your opinions to yourself?

sorry...sports and math? i have no clue whatsoever.

Just wanted to remind you that today is the last day of voting for Bestest Blog of the Year, and there are definitely still quite a few blogs within striking distance for the fame and glory (and $50 cash prize!).

EXCLUSIVE results will be featured on my new (and improved!) blog, BestestBlog.com, 8AM EST on Tuesday morning. Voting for new "Best Blog of the Days" has already begun and the first winner (based entirely on your votes) will be picked Wednesday (and every) morning at 8AM (again at Bestest Blog). Get in the running by joining the Blankest Blank Blog Directory...over 100 have already, and we haven't even handed out any awards yet!!

We'll also be having daily results (again based on your nominations and votes) for Funniest Video, Funniest Picture, Funniest Joke, and Most Fun Game every day at 10AM, 12PM, 2PM, and 4PM respectively.

I hope you'll stop by and leave a comment some time, we've got lots of exciting stuff on the horizon!

P.S. I AM a math teacher and loved this post!

I know nothing about sports really. Thought I would stop by and say hellos anywhoo :-)

Egads.. math and baseball in the same post? LOL

The results are in!! Check em out and see where your blog ranks!