For want of a nail... how a few wrapped cigars might have changed history

One morning in September 1862, outside the town of Frederick, Maryland, Cpl. Barton W. Mitchell of Company E, 27th Indiana, and a comrade saw a "bulky-looking envelope" protruding from the grass. Mitchell was moved to pick it up and inspect the contents.

And what a find it was for him: Three cigars, wrapped in a paper.

The expected course for a tobacco-craving soldier might have been to remove the paper and toss it away... but Mitchell was curious... so he unfolded the paper and scanned it.

It was labeled Special Orders No. 191 from the Headquarters of the Army of Northern Virginia.

Mitchell and his sergeant passed the paper to the company commander, Captain Kopp. He took one look and sent the paper up to regimental HQ. There, it went Col. Silas Cosgrove and then to Brig. Gen. A.S. Williams, who was at HQ that morning. Williams looked at it and summoned his adjutant, Col. Pittman, who stuck the paper in his pocket and rode off to find General McClellan.

That paper contained Lee's battle plans for the invasion of Maryland. McClellan now had Lee's plans, too, but even with this extraordinary advantage he was able to win only a technical victory at Antietam. But this technical victory was enough to force Lee to abandon Maryland... and set the stage for the issuance of the Emancipation Proclamation... avoiding British recognition of the Confederacy... and paving the way for eventual Union victory.

The improbable discovery of Special Orders No. 191 is well documented; my source for the above is Bruce Catton, in "Mr. Lincoln's Army," ch. 5; here's a link to the Wikipedia article on the Battle of Antietam (also describing the discovery of Lee's battle orders).

But... what might have happened had those orders not been dropped? Or if they'd been found... and casually thrown away in favor of the cigars wrapped within? Lee's invasion of Maryland might have succeeded; Britain might then have recognized the young Confederate States and have attempted to negotiate an armistice. There were powerful interests in Britain lobbying for Confederate recognition before Antietam... right up until the issuance of the Emancipation Proclamation.

Harry Turtledove has written 11 books -- count 'em, 11 -- that proceed in logical order from the non-discovery of Special Orders No. 191, starting with "How Few Remain" in 1997. In this timeline, Lincoln was forced to accept Britain's mediation... and to agree to share the American continent with a triumphant Confederacy. Turtledove starts with several characters in the U.S.A. and C.S.A. (such as a George Armstrong Custer who did not die at the Little Big Horn) and follows them, or their descendants, through roughly 65 years of alternate history.

After "How Few Remain" came the three books of the "Great War" series -- World War I fought on American soil: The U.S.A. battles the C.S.A. across North America, while its ally, Germany, fights the Confederate allies, Britain and France, in Europe. Woodrow Wilson is President... of the C.S.A.

Then came the three books of the "American Empire" series -- The U.S.A. has occupied Canada and parts of the Confederate States (Kentucky, a chunk of Texas, a chunk of Virginia, and Oklahoma -- called Sequoyah in this timeline). The United States has set up a puppet state in Quebec. But it fails to enforce the harsh terms it obtained from the C.S.A. at the end of the Great War... and a disgruntled noncom from that conflict rises to become a national figure, building a political party based on race hatred. You will be forgiven if you see a parallel between the events in this alternate timeline and the rise of Nazi Germany in our own. The target of the Confederate ex-noncom's hatred, however, is blacks, not Jews. 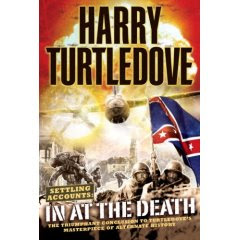 The latest series is entitled "Settling Accounts." The fourth and last book in this series, "In at the Death," was just released at the end of July.

The "Settling Accounts" series is an alternate history of World War II, occupying roughly the same years -- but with the parties all jumbled up. The Kaiser won the Great War with the help of the U.S.A.; the Tsar never fell. And millions of black people are being murdered in the Confederate States. But some things are the same: The atom has been split and scientists around the world -- and in the U.S.A. and C.S.A. as well -- are trying to build bombs based on these discoveries. "In at the Death" takes us to the end of that war, and into the occupation of the losing country after its unconditional surrender.

Like its ten predecessors, "In at the Death" is a chilling look into a future that might have been. Yes, Turtledove repeats himself -- if I had a nickel for every time he has a character observe how cigarettes in the North are inferior to those made from Southern tobacco I could probably cover next month's rent here at the Undisclosed Location. The pace of these books makes the repetition forgivable: The action is constant, and constantly shifting from one character's point of view to another's. Some characters are high up on either side, some are in the trenches. Turtledove has obviously studied the strategy and tactics of the Second World War; he's simply moved the action from Over There to over here.

These are not children's books: There is no attempt to sugar-coat the language used by soldiers or sailors. Characters visit sporting houses. Some characters live, some die. Many people die horribly in combat -- or otherwise. I've read reviews of these books that criticize Turtledove's characters as 'wooden' or 'one dimensional.' But I think you may come to like some of them. You'll have grudging respect for others, and there are some you will certainly hate. You'll care if some characters live or die. Wooden or one-dimensional characters wouldn't produce these responses. But I will concede that these stories are not about Turtledove's characters; his characters are instead invented in the service of the story.

What makes the new book -- what makes all these books -- worth reading is the eerie plausibility of it all.

Can you jump in and read the 11th book without reading the first ten? I can't say that with certainty, mainly because I have read the first ten. But I think so. If you're a fan of alternate history, you probably have at least sampled Turtledove before. But, if you're a history buff, and unfamiliar with the genre, you may find this quite interesting. And you will probably come away from this series, as I have, very grateful for the curiosity of Corporal Mitchell.

If you're looking for a one volume exposure, try Turtledove's "Ruled Britannia" (the Spanish Armada wasn't sunk and William Shakespeare is commissioned to write two plays -- the Spanish occupiers want a memorial to Phillip II and the English underground wants a play that might rouse the populace) or "In the Presence of Mine Enemies" (the Nazis won World Wars II and III and occupy America, but the action focuses on a Jewish remnant -- in Berlin in the early days of the 21st Century.)
Posted by The Curmudgeon at 9:33 AM

Thanks for the book reviews. They look very interesting.

McClellan it seems was typical of today - really a politician masquerading as an armchair general. I mean, he ran against Lincoln in 1864. A real general would have seen the intelligence and fought for a decisive victory...

wow curmie i never knew that! wow. you mean to tell me the south could have risen?? and the war of northern aggression would have ended differently? or may have? amazing. what would the world be like today had that happened??? it would have affected the entire world i think. just wow...

Lincoln seems to have been surrounded by complete and total incompetents when it came to his stable of high-ranking officers. I don't know what the major malfunction was but McClellan wasn't the only one to pass up on an opportunity to have put an end to the war much sooner than it was.

These books sound absolutely fascinating to me as I am intrigued by history anyway. I may just have to see if they exist at the local library. Thank you for the great review!

These books sound quite interesting. I am not familiar with this alternate history genre.
Thanks for educating me.