I saw this story late last week on Yahoo! News. This, however, is a link to Andrea Thompson's story on Live Science.

I think this link may last longer than the one to Yahoo! News.

Probably not as long, however, as the DNA in the dodo skeleton to which the story refers.

Imagine: A fragile, badly decomposed dodo skeleton, discovered by chance in a cave in the highlands of the island of Mauritius, off the east coast of Africa. Despite its deterioration, scientists hope the skeleton may yield actual dodo DNA because of the "stable temperature and dry to slightly humid environment" in that cave.

The last of the dodos died out, according to Ms. Thompson's story, in the late 1600's -- that is, little more than 300 years ago. Her story does not reveal how old "Fred" (that's the nickname the scientists have given to their skeletal find) might be... but the imagination kicks in at this point, doesn't it?

But science is catching up. Researchers are making progress in sequencing mammoth DNA; a "Pleistocene Park" may still be impossible... but seemingly just over the scientific horizon.

Working through the weekend, I have uncovered an artist's depiction of what a restored colony of dodos might look like. I can't account for the porcine fellow in the middle of the sketch, however: 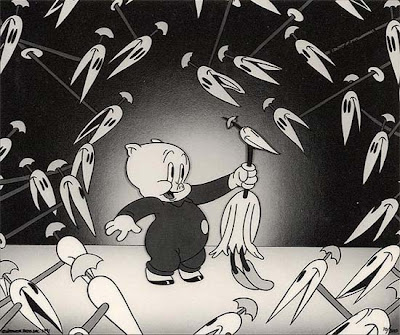 You were expecting more?

Email ThisBlogThis!Share to TwitterShare to FacebookShare to Pinterest
Labels: Just for giggles, News and Views

I thought those guys were some kind of aliens.

As an aside, we have a lovely version of Porky Pig singing "Blue Christmas" that we found on the internet years ago that is probably one of the funniest things we've ever heard. You should search for it. It's good.

But it would be way more fun to recreate dinosaurs for real, then we could make a theme park island, with tourists, they could see real live dinosaurs in a natural habitat... wait wait... why could this be bad?

But dodo birds, what could go wrong?

With just one set of Dodo DNA, they could not really get a proper colony of dodos, culd they Wouldn't they all be clones ?

is that one dinosaur to another curmy?

Dodo Park instead of Jurassic Park?

Looks more like Heckle. Or Jeckle? And their friends.

Some days you just make me shake my head and realize that there are others with such strange thoughts all the time...

thanks for making me feel so not alone...

sorry that I have not visited lately been busy in the garden, with the new puppy and just plain resting!

I was thinking Jurassic Park, too! Funny picture. :)

The picture is from a Warner Brothers cartoon, "Porky in Wackyland" (I believe that's the correct title) in which Mr. Pig searches for the "last dodo."

Having captured his elusive quarry, Porky asks if he is indeed the last dodo... whereupon all these other, identical birds (clones, Sharon?) appear and assure him that, sure enough, that is the last dodo.

The memory of the cartoon was triggered when I read the Live Science article....