There is a limit to how low we'll sink 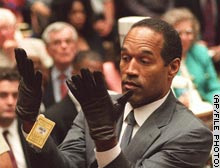 This is good news: the Fox O.J. 'special' interview has been canceled. This is better news, if true: The linked article also states that Simpson's book -- detailing how he might have killed Ron Goldman and his ex-wife Nicole, the mother of his children, but all the while denying that he did it -- will also be withdrawn.

But consider this quote from Rupert Murdoch, News Corp. chairman (News Corp. being the parent company of both Fox and the company that was to publish Simpson's non-confession confession: "I and senior management agree with the American public that this was an ill-considered project. We are sorry for any pain that his has caused the families of Ron Goldman and Nicole Brown Simpson."

"Any" pain? Like maybe there wasn't any... but just in case we're apologizing?

Try heart-wrenching, gut twisting, re-open the wounds pain, and plenty of it. You should have apologized for that if you were actually sorry. And, Mr. Murdoch, your apology should also have mentioned that you've told the people involved in green-lighting this project to go look for other work.

But the deficiencies of the apology aside, it's gratifying to know that there are some societal standards of decency. Until the next time the line is moved... ever downward.
Posted by The Curmudgeon at 5:50 PM

I was overjoyed when I saw this news yesterday.

Thank you for commenting on site about this, we have been following this story with great interest in the UK too. I'm wondering whether there wasn't pressure from advertisers too for Murdoch to pull the plug on this, what a relief he has.

I can't fathom how emotionally exhausting it must be for the families to watch the person they believe to be the killer, prancing around in complete freedom.

I was very happy to see that Fox was pulling the plug on their sleazy project. I couldn't believe that they were trying to pass off Simpson's interview off as “journalism” in the first place.