Still cranky this morning, folks. At least today's rant is on business, not politics: I saw this in the Chicago Sun-Times this morning and it reminded me of a view I'd previously expressed.

Herewith a portion of this morning's article:

Federated Department Stores posted a surprise third-quarter loss Wednesday due to $145 million in costs to convert Marshall Field's and 10 other regional department stores to Macy's, and gave new details about sales declines at the former Field's stores.

Federated jettisoned Marshall Field's name and reconfigured the chain as Macy's on Sept. 9, one year after it bought Field's former owner, St. Louis-based May Department Stores.

The $3 million net loss, or 1 cent a share, compared with a year-ago profit of $436 million, or 91 cents, according to Federated's earnings announcement Wednesday.

Sales have declined at Field's and the other former May Department Stores because of fewer sales events and inadequate inventory of goods, among other reasons, Federated Chief Financial Officer Karen Hoguet told Wall Street analysts.

Hoguet cited poor sales of furniture, silverware, bedding, coffee-makers and other home furnishings; lengthy waits for merchandise that wasn't in inventory; fewer sales promotions at Macy's than at the May stores, and salespeople needing time to learn about Macy's new merchandise assortments.

"We have a lot of work in front of us to create a quality selling culture and to execute correctly the localized assortments in the new Macy's stores," Hoguet said.

Hoguet said Macy's stores will offer big home-store sales for the holidays, and she said she is confident the stores are headed in the right direction.

I suggested in the italicized rant portion of the earlier post that this "direction" was right down the tubes. But, recently, I heard an alternate explanation of this crazy move that -- while Machiavellian -- just might (eventually) justify the jettisoning of the venerable Field's name: It's all a real estate deal. 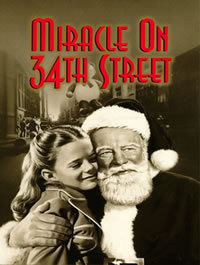 After a few years of declining sales, the sale of the State Street property -- for condo conversion or whatever -- might fetch more than the store itself would be expected to produce, even with years of strong sales. The Macy's stores might even catch on in the suburbs, which are used to generic, national brands, so it could be a win-win for Federated.

If that's the way it plays out... well, cold hard cash will trump tradition and sentiment every time... except in the movie.

* * *
Actually, Mircale on 34th Street is one of the best, and most lawyer-friendly, movies ever made: Even the prosecutor -- who's supposed to be sort of a villian -- is shown to have a human side. If you're a psychologist, maybe then the movie doesn't work for you.... What do you think?
Posted by The Curmudgeon at 9:33 AM

well curmy when you said "trump it" you could be on to something there. what do you think about that my friend? i am cranky also, too many things to do and only one day left. everybody wants something every minute it seems, so i'll shut up and go fetch some more... take care my friend.....bee

Miracle on 34th steet is my all time favorite Christmas movie. Even Mother Jones has a soft side.

Mo34th is great, but every time I faced a trial I re-read Atticus' closing in To Kill a Mockingbird. And the Gregory Peck movie is almost dead on, closing argument wise.

I'm sorry to hear MF on State Street is closing. My grandmother took me school shopping there every fall for years. She even got me my first official ladies undergarment there, too, and afterwards we celebrated the event with lunch. Just two eyars ago, my sister and I took our boys there for lunch, to twist the family tradition in our way. I believe there's a historical marker on the third floor now.

Your blog is daily fare, now, and I thank you.